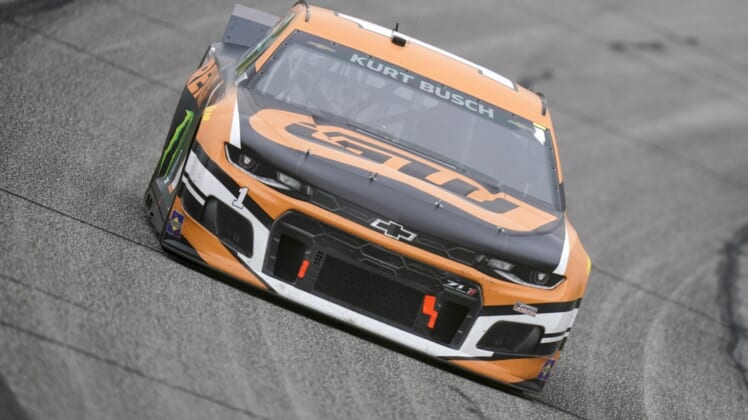 Veteran Kurt Busch, perhaps driving for his job or even his career, got just what he needed on Sunday as he won the Quaker State 400 at Atlanta Motor Speedway.

The victory, which was his first since Race No. 30 of 2020 and just his third in the last three seasons, gives him a berth in the 16-driver, 10-race playoffs that begin five races from now at Darlington Raceway.

It was his fourth career win at the 1.5-mile Atlanta oval and came by 1.2 seconds over his runner-up brother Kyle Busch.

Fourth was Alex Bowman of Hendrick Motorsports while Team Penske’s Ryan Blaney, who won at Atlanta in March, was fifth.

To get the win, Kurt Busch had to track down his younger brother, who had taken the lead from Kurt during green flag pit cycling with about 50 laps to go. With 24 to go, Kyle got caught in lapped traffic, Kurt made the pass for the lead and, from there, held on for the win.

Kurt Busch’s current team owner, Chip Ganassi, said recently that he is selling the Chip Ganassi Racing NASCAR operation after the season. The new owners have said that Daniel Suarez will occupy one of their two cars next year. That means jobs are on the line for both Busches and Ross Chastain.

Georgia native Chase Elliott, the defending series champ and a winner a week ago at the Road America road circuit, started from the pole and led the first 13 laps. But troubles in the pits — including one incident in which his car hit a pit crew member for Cole Custer — knocked him back to the middle of the field.

Elliott climbed back and would finish seventh.

Truex was sent to the rear of the field for the start of the race after failing pre-race inspection twice. But around Lap 50 of 260, the Joe Gibbs Racing driver entered the top 10. His hopes took another hit, however, when he and Kevin Harvick ran into each other in the pits between stages 1 and 2. But both Truex (a three-time winner this year) and Harvick (zero wins in 2021) made it back into the top 10 by the end of the second stage.

Kyle Larson of Hendrick Motorsports, a heavy favorite to win at AMS, had his chances of winning a fifth 2021 race hindered when he was slapped with a speeding penalty in the final stage. He finished 18th.

As the cars were circling under yellow before the start of the third stage, officials threw the red flag. The problem was pot holes on the front stretch — the track’s 24-year-old asphalt was coming up. The pot holes were filled and race went back to yellow after a 19-minute stoppage.

Last week, AMS owners said they would repave and reconfigure the track in the offseason. That news angered drivers who enjoy racing on the old surface and configuration.

The Series heads north to New Hampshire Motor Speedway in Loudon next weekend.