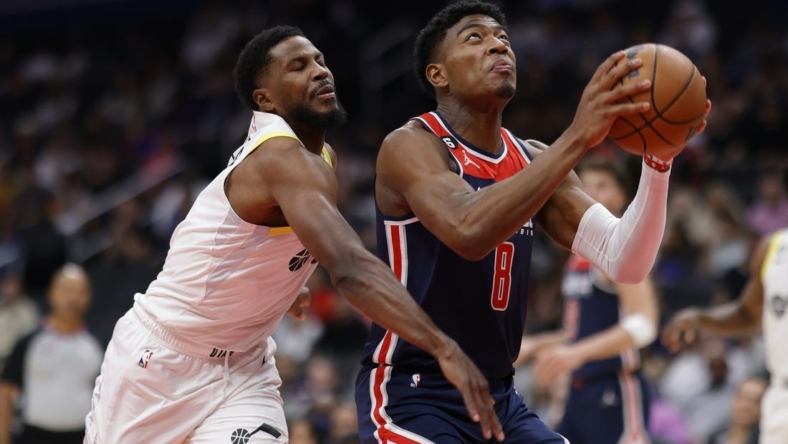 Kristaps Porzingis had 31 points and 10 rebounds and Kyle Kuzma scored 23 as the host Washington Wizards defeated the red-hot Utah Jazz 121-112 on Saturday night.

Corey Kispert contributed 18 points to help the Wizards earn a third consecutive victory despite the absence of Bradley Beal, who was sidelined due to the health and safety protocols.

Jordan Clarkson paced the Jazz with 18 points, but Utah’s defense couldn’t contain Washington from outside. The Wizards took a page from the Jazz, one of the NBA’s top 3-point-shooting teams, by draining 16 of 36 beyond the arc, including four apiece for Porzingis and Kispert.

Lauri Markkanen and Collin Sexton each scored 17, and Malik Beasley netted 16 in Utah’s first loss after a four-game winning streak.

The Wizards took a 15-point lead in the third quarter, and had answers every time Utah made a push in the final quarter.

Kelly Olynyk hit a 3 as the Jazz pulled within 114-107, but the Wizards then scored five straight to clinch the win.

Utah led 32-30 after the first quarter and appeared to be on route to taking an advantage into halftime.

Jarred Vanderbilt gave the Jazz a six-point lead with a dunk with 3:07 to go in the half.

But the Wizards held the Jazz scoreless after that while going on a 12-0 run that began with back-to-back 3s by Porzingis and Kuzma.

A Monte Morris jumper with 5.5 seconds left gave the Wizards a 61-55 halftime lead.

Kuzma and Porzingis traded buckets to open the second half, and Washington quickly went up by 15.

Utah closed the third on a 7-2 spurt to pull within eight, 92-84, going into the fourth quarter. But the Jazz couldn’t get any closer than within six down the stretch.