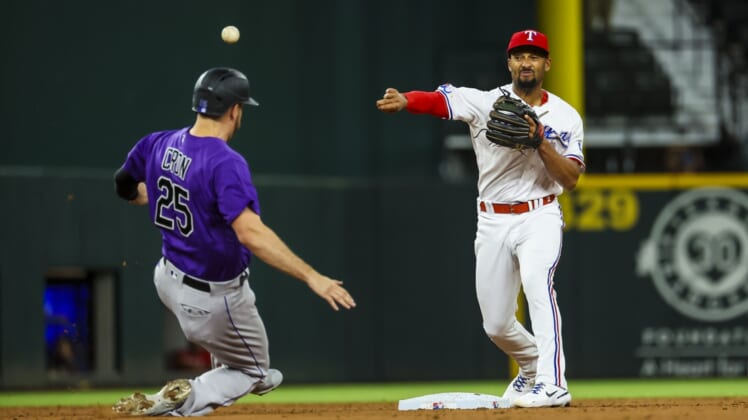 Jhoulys Chacin (2-0) tossed 2 2/3 innings of scoreless relief for the victory, Colorado’s fourth in a row. Daniel Bard pitched a scoreless ninth inning for his second save.

Texas had four hits — two each by Mitch Garver and Andy Ibanez — and was swept in its home opening series.

Charlie Blackmon had two of the Rockies’ seven hits.

The Rangers took the lead in the second inning when Colorado starter Chad Kuhl walked the first two batters, struck out the next two and then gave up an RBI single to Ibanez to make it 1-0.

The Rockies answered in the third inning off Rangers starter Martin Perez. With one out, Garrett Hampson singled to left, Joe walked and Blackmon lined a sharp single to right to bring home Hampson. Bryant drove home Joe with a double to right to give Colorado a 2-1 lead.

In the fifth, Joe doubled to left and moved to third on Blackmon’s single. Greg Holland replaced Perez and walked Bryant to load the bases with no outs.

C.J. Cron’s groundout brought home Joe to give the Rockies a 3-1 lead, but Holland got the next two to prevent further damage.

Perez (0-1) allowed three runs on seven hits in four-plus innings. He walked one and struck out two.

Texas nearly took the lead in the bottom of the fifth after Kuhl walked two batters with one out. Chacin came on and struck out Marcus Semien, but then Corey Seager hit a deep fly ball that appeared headed to be a home run. However, center fielder Randal Grichuk leapt and reached over the fence in right-center to rob Seager and end the inning.

Kuhl allowed one run on two hits and four walks while striking out five in 4 1/3 innings.

Colorado added another run in the seventh when Joe walked, moved to second on a groundout, to third on a wild pitch and scored on Bryant’s sacrifice fly.

The Rangers had two on with one out in the ninth, but Bard got Willie Calhoun to pop out and Brad Miller to fly out to end the game.