Due to Canadian COVID-19 restrictions, the Whitecaps are playing their home games in Utah.

In the game’s first minute, Kreilach pounced on a through ball from Aaron Herrera in front of the net and got a shot over his defender and toward the far post, the ball bouncing clear of goalkeeper Thomas Hasal.

Vancouver was the better team throughout the rest of the first half after conceding the goal but couldn’t put one in the net. Deiber Caicedo, Cristian Dajome and Caio Alexandre were the most active Whitecaps, with five shots between them.

In the 53rd minute, Dajome’s cross was high quality but just a little beyond the reach of a sliding Caicedo, who pushed the ball wide of the goal.

Hasal denied Kreliach in the 56th minute, but a minute later Kreilach got on the end of a Justin Meram pass into the box and headed in his second goal of the night.

Hasal stopped Rubio Rubin’s attempt right before Albert Rusnak hit the post with a shot in the 61st minute. 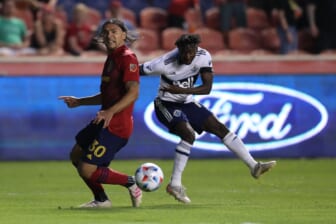 However, Real Salt Lake made good on chances later in the second half. Rusnak converted a penalty kick in the 74th minute, and Julio fired in a shot from the center of the box in second-half stoppage time to seal the win.

Real Salt Lake has taken the first two meetings of the regular season from the Whitecaps, who hope to return to Canada soon to start playing actual home matches.