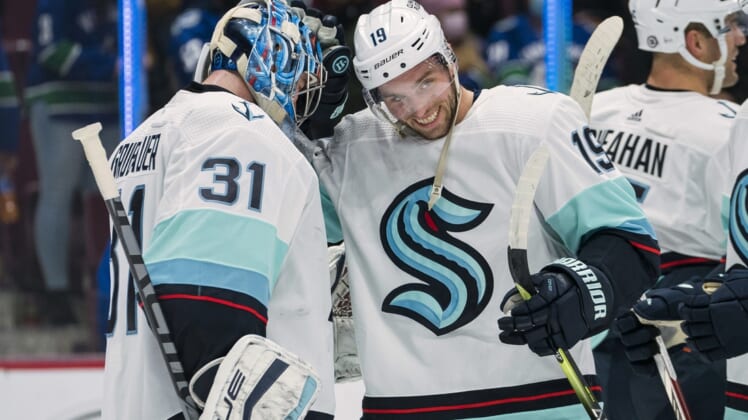 The road to quick success was charted for the Seattle Kraken thanks to the immediate prosperity of the Vegas Golden Knights when they joined the NHL four years ago.

However, what the Golden Knights accomplished in their amazing inaugural season of 2017-18 also will likely create more waves for the Seattle expansion franchise to withstand.

As the Kraken prepare for their debut on Tuesday against the Golden Knights, they are bracing for a league that won’t overlook them as new teams were in the past.

“No one expected them to be a first-place team, a top team,” Kraken defenseman Mark Giordano said of the Golden Knights on the NHL @TheRink podcast. “But there’s not going to be that with us. Teams are going to be ready. They’re going to know how it went in Vegas. We had the exact same rules as far as expansion draft rules, so teams aren’t going to be taking us lightly by any means.”

Because the Golden Knights were an immediate tour de force — boasting the greatest expansion season in North American history by winning a division title en route to losing in the Stanley Cup Final to Alex Ovechkin and the Washington Capitals — the Kraken will be held, unfairly or not, to that standard.

Which begs the big question: Can the Kraken duplicate the success of their expansion cousins?

Seattle’s players are better off ignoring any and all comparisons and expectations. However, having won four of six preseason games, they have done a good job inserting a winning feeling into the club’s culture.

“Now it’s about believing, too,” said Giordano, who was claimed from the Calgary Flames in the expansion draft. “Everyone said it, and everyone knows it, we got a lot of good players in the expansion draft. There was a lot of good players exposed in the league because of the way the rules are, and now it’s on us to go out on the ice and perform and get some wins together, rack up the points and take the next step.”

While the Kraken may not boast a litany of superstars — Giordano, the 2019 Norris Trophy winner as the league’s top defenseman, is arguably the biggest name — they have built a team that can succeed with a hard-working, gritty and up-tempo style and strong defensive play in front of No. 1 goaltender Philipp Grubauer, who was signed as a free agent from the Colorado Avalanche, and backup netminder Chris Driedger.

“Those are baseline foundational building blocks, along with skill and intelligence,” coach Dave Hakstol told the Seattle Times. “Those are things you have to have within a good hockey team.”

Seattle’s roster may not be a Stanley Cup contender on the surface, but the Kraken can’t be dismissed immediately from playoff contention for a couple of reasons.

For starters, the Pacific Division, especially beyond the Golden Knights, has a litany of middling-to-rebuilding teams, so Seattle could earn a playoff spot.

Another reason is how general manager Ron Francis built the squad. A case can be made the Kraken have more offensive punch than Vegas originally boasted.

Throw in the buzz around the team — NBA Hall of Fame star Shaquille O’Neal was donning a Kraken jersey when he unveiled his new restaurant in the city — and you never know what can happen when momentum builds.

“It’s really exciting,” Driedger said of the frenzy around a new team. “I mean, it’s one of the reasons I signed here. It’s a lot of fun coming to a brand new city for the inaugural season. There’s tons of excitement around. Everyone’s excited in the room. The fans are pumped up. The city seems like it’s on fire with Kraken hockey. I think we’re going to build off that energy and take it into the season.”