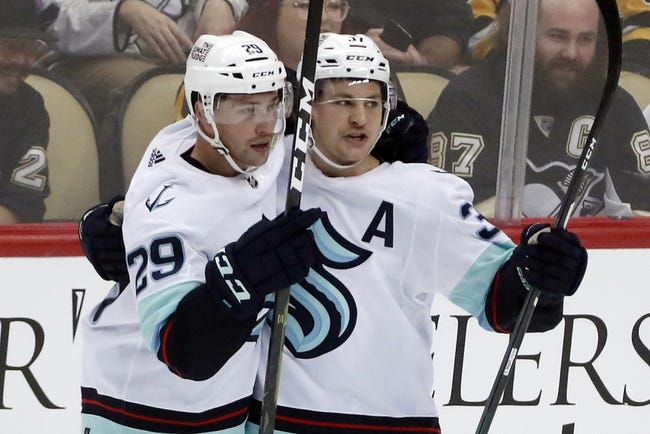 Brandon Tanev scored with 3:39 left in regulation Saturday to give the visiting Seattle Kraken a 3-2 win over the Pittsburgh Penguins for their fourth straight win.

Yanni Gourde’s pass from deep got to Tanev in front, and the former Penguins winger swept the puck over goaltender Tristan Jarry’s right shoulder.

Gourde finished with a goal and two assists, Tanev added an assist along with his goal, and Vince Dunn also scored for the Kraken, who topped the Penguins 3-1 at home one week earlier.

Sidney Crosby had a goal and his 900th career assist, Jake Guentzel also had a goal and an assist, and Kris Letang had two assists for the Penguins, who have lost seven straight (0-6-1) for the first time since 2005-06.

The Penguins dominated much of the first, but it wasn’t until 5:24 of the second that Crosby gave them a 1-0 lead. From the top of the slot, he rifled a one-timer slapshot past Jones’ glove off a pass from Guentzel in the left circle. Guentzel had been a game-time decision after missing Friday’s practice because of illness.

Dunn tied it for Seattle at 7:48 of the second. Gourde won a faceoff at the left dot back to Dunn near the point. His shot changed directions when it went off the Penguins’ Sam Poulin and eluded Jarry’s blocker side.

Jarry made the biggest save of the second when the Kraken’s Morgan Geekie got a shorthanded breakaway after Letang missed while diving for the puck in his end. Jarry made a glove save on Geekie.

Gourde gave Seattle a 2-1 lead at 7:48 of the third. Tanev, from the slot, directed the puck ahead with his shinpad. Gourde, from in tight, lifted the puck over Jarry’s blocker.

At 9:51 of the second, Guentzel tied it 2-2 when his shot from deep on the left side went in off the stick of the Kraken’s Matty Beniers. Crosby’s assist made him the 20th NHL player to reach 900, and he is the sixth-fastest at 1,120 games.