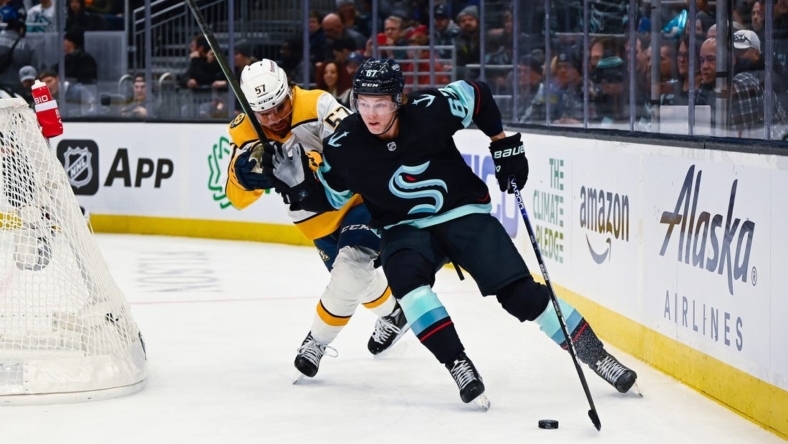 Jordan Eberle scored twice, and Andre Burakovsky had a goal and two assists as the Seattle Kraken extended their franchise-record winning streak to five games with a 5-1 victory against the visiting Nashville Predators on Tuesday night.

Will Borgen and Brandon Tanev also scored for Seattle and goaltender Martin Jones made 24 saves.

Filip Forsberg tallied for Nashville, which dropped to 2-2-0 on its five-game Western swing. The Predators will wrap up their trip Thursday in Denver against the defending Stanley Cup champion Colorado Avalanche.

The Kraken scored four times in the opening 16:25, the first time they’ve netted four goals in a period in their one-plus seasons in the NHL.

Eberle scored just 38 seconds into the game on a slap shot from the top of the right faceoff circle that beat Nashville goalie Juuse Saros to the short side.

The next two Kraken goals came after Nashville turnovers in its own end.

Burakovsky, who assisted on the first two goals, made it 3-0 at 15:16 after Alex Wennberg picked up the loose puck. He passed to Burakovsky, who patiently waited for Saros to make a move and then tucked the puck into an open net.

Kevin Lankinen replaced Saros and stopped all 13 shots he faced.

Forsberg spoiled Jones’ shutout bid, tallying on a breakaway at 10:25 of the second period after Borgen’s shot from the point was blocked.

Tanev capped the victory with an empty-net goal with 1:11 remaining as the Kraken improved to 3-3-1 at home.

The Kraken’s penalty kill stifled Nashville on two power plays, as Seattle’s PK improved to 13-for-13 during its five-game run.