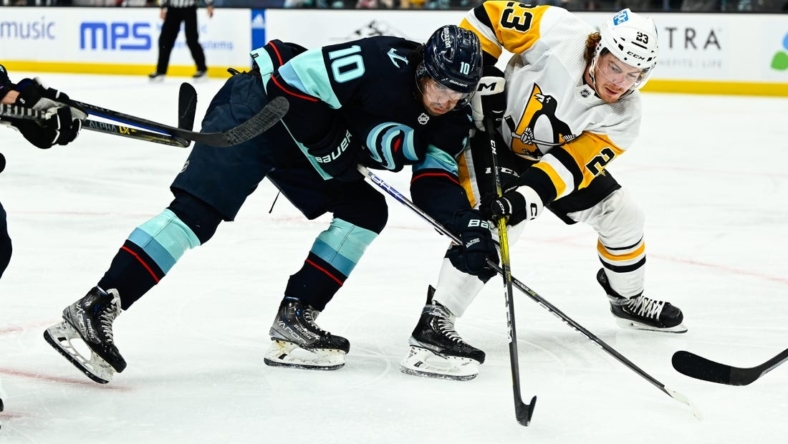 Eberle scored his first goal of the season and Jones made 32 saves — one day after their wives gave birth to baby boys.

Morgan Geekie scored what proved to be the winner and Jaden Schwartz added an empty-netter with 59.9 seconds left for Seattle, which went 2-1-0 on a three-game homestand. Vince Dunn had two assists.

Jake Guentzel tallied and goaltender Casey DeSmith stopped 27 of 29 shots for the Penguins, who suffered their fourth consecutive defeat — all by multiple goals.

Seattle took the lead on a two-on-one break at 18:33 of the second period after Dunn stole a pass at center ice. He fed Geekie, who worked his way down the right wing before sending a pass to Daniel Sprong in the slot for a shot that DeSmith saved. Geekie pounced on the rebound near the post and lifted a shot over the goalie’s leg pad and into the roof of the net.

The Penguins opened the scoring at 10:05 of the second.

Guentzel, who missed the previous four games with an upper-body injury, stole a pass from Seattle defenseman Jamie Oleksiak at the far blue line, split two defenders to break away and slipped a forehander under Jones’ pads from between the faceoff circles.

The Kraken tied it at 11:20 after Schwartz stole the puck from defenseman Jan Rutta behind the Pittsburgh net. Schwartz fed rookie Matty Beniers in the slot and Beniers deked his way around a defender before sending a backhanded pass to Eberle and he tapped the puck into an open net.

The Kraken had two apparent goals waved off after challenges by Penguins coach Mike Sullivan in a three-minute span midway through the second period.

Ryan Donato appeared to break a scoreless tie at 8:09, converting a pass from Eberle on a two-on-one breakaway. But a video review determined Seattle was offside.

After the Penguins took the lead, the Kraken seemed to tie it at 11:09 on a tap-in by Andre Burakovsky. The play started with Sidney Crosby’s backhanded clearance from deep in his own zone being intercepted. A review determined Seattle’s Alex Wennberg knocked down Crosby’s pass with a high stick.