Kraken, Senators hopeful for future ahead of clash 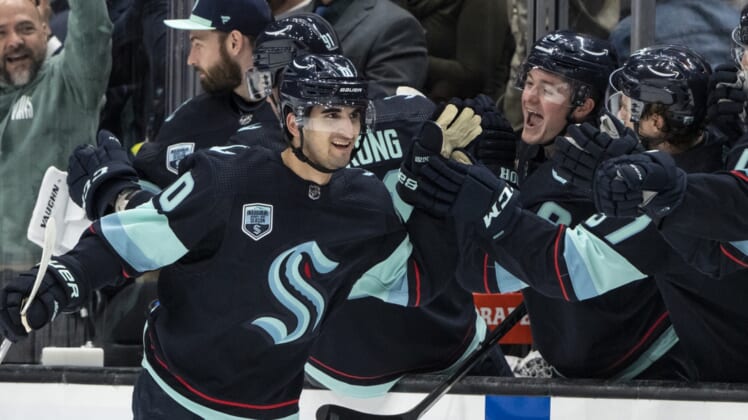 While both the Seattle Kraken and Ottawa Senators will miss the Stanley Cup playoffs, there are signs of a potentially promising future for each club.

Matty Beniers looks to continue the strong start to his NHL career for the Kraken, who will try to keep the Senators from matching a season high with their third straight road victory on Monday night.

Seattle (24-44-6, 54 points) is in danger of posting the fewest points in the NHL during its expansion 2021-22 season. But the 19-year-old Beniers, Seattle’s first-ever draft pick taken second overall in 2021, has already endeared himself to the team’s faithful.

After recording an assist during his NHL debut in a 5-3 loss at Calgary on April 12, Beniers posted his first career goal in Saturday’s 4-3 shootout home victory over New Jersey.

“I’m impressed with the solid areas of his game,” Seattle coach Dave Hakstol said. “He supports the puck in all three zones very well.

“The creativity is there, and as his confidence grows, we’ll continue to see more and more of that offensive creativity.”

Beniers will try to help the Kraken win back-to-back contests for just the sixth time this season. Seattle lost 4-3 at Ottawa in overtime on March 10.

Though the Senators (28-40-7, 63 points) will miss the playoffs for a fifth consecutive season, they are in position to record the franchise’s most points since they registered 98 in 2016-17. Ottawa fell 5-4 in overtime to Toronto at home on Saturday, but second-year center Tim Stutzle, 20, scored twice to reach the 20-goal mark for the first time.

Second on the team with 52 points, Stutzle has six goals and seven assists during a career-high eight-game point streak. He had an assist in last month’s win over the Kraken.

“He’s going to be a great player in this league for a long time,” Toronto star Mitch Marner told Sportsnet.

Fellow young Ottawa star Josh Norris, also in his second NHL season, has a team-leading and career-high 33 goals, and sits one point back of Stutzle. Norris scored twice, including the overtime winner, versus Seattle on March 10.

More recently, Ottawa has totaled 19 goals while going 4-1-0 on the road in April.

“Our effort will be there,” Senators coach D.J. Smith said. “We want to be known for that — you’ll never get a freebie against us.”

Ottawa’s Anton Forsberg has set career highs with 40 starts and 19 wins and currently boasts a personal-best 2.78 goals-against average. He made 30 saves at Seattle. Backup Mads Sogaard has a 3.07 GAA while splitting his first two NHL starts.

With two assists Saturday, Seattle’s Jared McCann extended his career-best point total to 43. He also scored one of his career-high 25 goals at Ottawa last month.