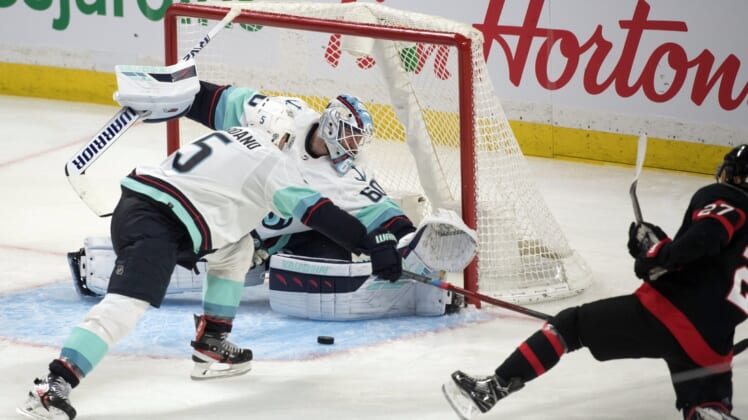 But he’ll take what he can get.

The expansion Kraken showed some mettle Thursday in Ottawa, rallying from a three-goal deficit in the final 11 minutes before losing to the Senators 4-3 in overtime.

Seattle will try to build on that late rally when it wraps up its five-game trip Saturday in Montreal.

Jared McCann, signed to a five-year, $25 million extension earlier in the week, got the Kraken going with his team-leading 22nd goal of the season at 9:14 of the third. Ryan Donato scored 36 seconds later and Mason Appleton, who had a first-period goal disallowed after a video review determined the play was offside, tied it with 6:59 remaining in regulation.

“I think we got a little bit desperate,” McCann said. “Honestly, I think that when you’re playing desperate, you make simple plays. And like I’ve said before, that’s the way you need to play hockey to win.”

Josh Norris’ overtime winner on the power play prevented the Kraken from securing their first win on the trip.

“It doesn’t lessen the disappointment in terms of the loss in overtime. Again, I said it the other night, we’re not looking for feel-good things. We’re looking for wins.”

Winning seemed an unlikely possibility after the Kraken, who are 1-9-2 in their past 12 games, fell behind 3-0 after two periods. Both of the goals they allowed in the second period came after defensive zone turnovers.

“The first two periods were inexcusable,” Donato said. “The momentum was dead. We needed something. Jared (McCann) got a big goal. And once we got that feeling of ‘We’re back in it’, I think guys felt a lot better about the situation.

“It’s unfortunate that it ended the way it did. But I think it’s a testament to our character.”

The Canadiens also have shown some character in recent weeks after a disastrous start following their run to the Stanley Cup Final last season. They opened 8-30-7, costing head coach Dominique Ducharme his job.

Montreal has won seven of its past nine games under interim coach Martin St. Louis, even with Wednesday’s 5-3 loss at Vancouver that completed a five-game trip.

Artturi Lehkonen had two goals and an assist in the loss for the Canadiens. Rem Pitlick scored the other goal.