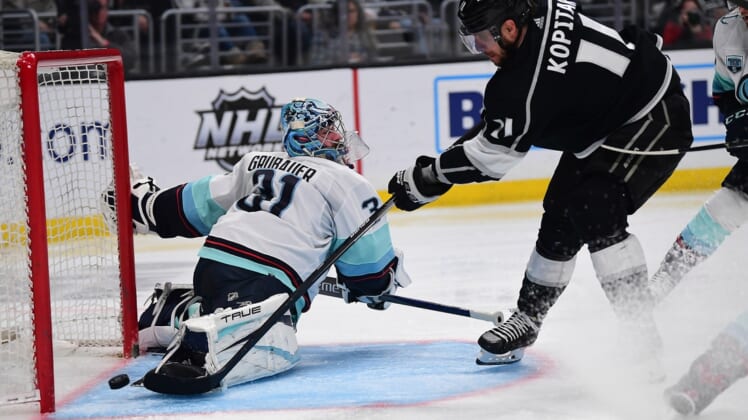 The Los Angeles Kings don’t have to wait long for the chance to continue their success against the Seattle Kraken.

Trying to extend their point streak to four games, the Kings aim for a second home victory over the Kraken in three nights on Monday.

While Los Angeles has positioned itself nicely for the franchise’s first playoff berth since 2018, Seattle was trying to record a season-high third consecutive victory when these teams met Saturday. However, captain Anze Kopitar had a goal and an assist as the host Kings won 4-2 and improved to 2-0-1 following a 2-3-1 stretch.

The idea of playing meaningful games this late in the regular season is something Los Angeles has strived for in recent years. And it’s an opportunity the Kings certainly won’t take for granted.

“It’s called progress,” coach Todd McLellan said. “There is satisfaction in that, but it doesn’t end. We’ve still got to grow and move the needle forward.

“This is the playoffs for us, and we’ve shown signs of growth during it, and it’s going to have to continue for whatever we have left.”

Los Angeles, which also won 3-1 at Seattle on Jan. 15, has two games remaining with the expansion Kraken this season. Though Seattle is one of three NHL teams yet to reach 50 points, it will look to rebound from just a second regulation defeat over the last six contests.

“We’ve had our struggles this year,” forward Morgan Geekie, who posted his sixth goal of the season on Saturday, told The Seattle Times. “But, we’ve also grown a lot as a team. I think (Saturday) is just another one of those nights where we’re going to take what we can out of it.”

Geekie has goals in back-to-back contests for the first time this season. He’s recorded five of his career-high 19 points over a current six-game stretch.

Seattle’s Philipp Grubauer stopped 23 of 27 shots Saturday after allowing four goals combined in winning his previous two starts. He’s started the last five games for the Kraken, but backup Chris Driedger could make his first appearance since March 10 on Monday. Driedger stopped 19 of the 21 shots he saw during that home loss to Los Angeles earlier this season.

Los Angeles veteran Jonathan Quick, who could get the nod in net on Monday, has lost two of his last three starts and owns a 3.21 goals-against average in his last 20. He posted a 2.03 GAA in his first 17 starts of the season.

Kopitar, who reached the 40-assist mark Saturday for 12th time in his storied career, has four in the last three games — and two versus Seattle this season. Meanwhile, touted Los Angeles defenseman Jordan Spence, who recorded his first goal in his ninth NHL game Saturday, has three points in his last four games.