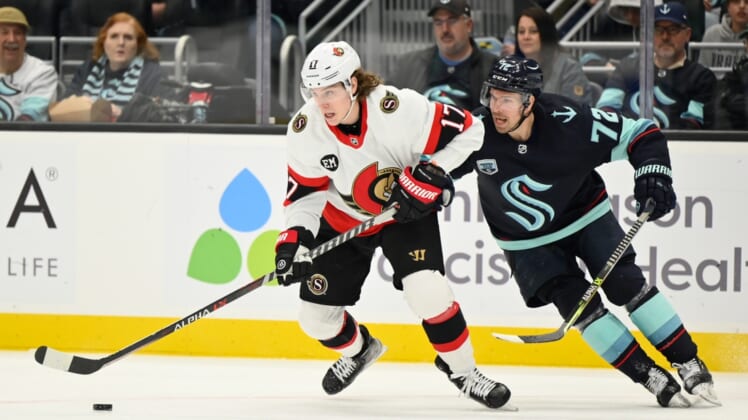 Victor Rask scored the tiebreaking goal late in the second period and recorded an assist as the Seattle Kraken beat the visiting Ottawa Senators 4-2 on Monday night.

Seattle’s Matty Beniers continued an impressive start to his NHL career with a second goal in his three games.

Down 2-1, the Kraken equalized with 10:08 left in the second, when Beniers deflected a shot that went in off Ottawa’s Austin Watson. Rask then put the Kraken up 3-2 with 3:45 remaining in the middle frame, off a Senators turnover, when he beat Anton Forsberg (25 saves) on the stick side.

Daniel Sprong also scored and Jared McCann’s had an empty-netter for Seattle (25-44-6, 56 points), which posted back-to-back victories for the first time since March 19 and 22.

Vince Dunn had three assists for Seattle, which has won back-to-back home games for the first time since Jan. 17 and 20.

Beniers, the first draft pick in Kraken history and second overall selection last year, recorded his first NHL goal in Seattle’s 4-3 home shootout win over the New Jersey Devils on Saturday. He has logged a point in each of his three contests.

Brady Tkachuk and Nick Holden scored for the Senators (28-41-7, 63 points), who were held to a season-low 14 shots on goal. Ottawa had won four of its previous five on the road.

Seattle struck early, taking advantage of the game’s first power play. From the far boards, Rask delivered a cross-slot pass to Sprong, who one-timed the puck by Forsberg just 4:36 into the game.

The Senators were outshot 11-3 through the opening 20 minutes, yet Ottawa needed only 1:11 into the second period to level the game on its fifth shot of the night. On the pursuit, Tkachuk eventually pushed the puck past Kraken goalie Chris Driedger (12 saves) for his fourth goal in five games.

A little more than two minutes later, Ottawa went ahead. Veteran defenseman Holden, mired in a 27-game goal drought, beat Driedger on the glove side.