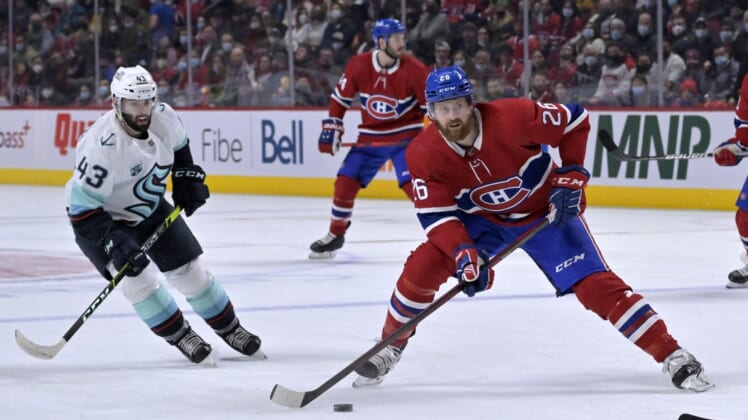 Philipp Grubauer made 30 saves and didn’t allow a score in a seven-round shootout as the expansion Seattle Kraken defeated the host Montreal Canadiens 4-3 Saturday night, sweeping the season series with the NHL’s most-storied franchise.

Marcus Johansson had two assists and scored the shootout winner on a backhander for Seattle, which snapped an eight-game road losing streak. Yanni Gourde, Ryan Donato and Jared McCann tallied in regulation for the Kraken.

Michael Pezzetta, Alexander Romanov and Nick Suzuki scored for Montreal, which lost its second in a row, and Sam Montembeault made 32 saves. The Canadiens were playing in front of a full house at the Bell Centre for the first time this calendar year after coronavirus restrictions were lifted.

Trailing 3-1 after two periods, the Canadiens rallied to force overtime.

Romanov made it 3-2 at 1:04 of the third on a slap shot from the top of the left faceoff circle.

Suzuki tied it with 2:12 remaining in regulation as his centering pass went off the stick of defenseman Adam Larsson and into the net.

The Kraken, who defeated Montreal 5-1 on Oct. 26 in Seattle, scored at even strength, on the power play and short-handed.

The Kraken opened the scoring at 9:26 of the first period, thanks to a Montreal miscue. With the Canadiens on the power play, Montembeault gloved a Seattle shot and dropped the puck in front of the net for defenseman Chris Wideman to avoid a faceoff in Montreal’s own zone. But Wideman was almost immediately checked by Gourde, with the puck sliding off Wideman’s stick and past a stunned Montembeault.

Pezzetta tied the score at 1-1 at 14:50 of the period. Jake Evans got to a loose puck behind the net and fed Pezzetta in the slot for a wrist shot.

The Kraken regained the lead at 16:42 of the first as Johansson’s shot went wide of the net but took a lively kick off the end boards and Donato was on the right wing to score on a one-timer.

Seattle made it 3-1 on McCann’s power-play goal at 15:05 of the second. Johansson got the puck behind the net and made a backhanded pass to a wide-open McCann in the slot and he put a wrister into the upper left corner of the net.