Kraken, Coyotes match up after deadline-dealing 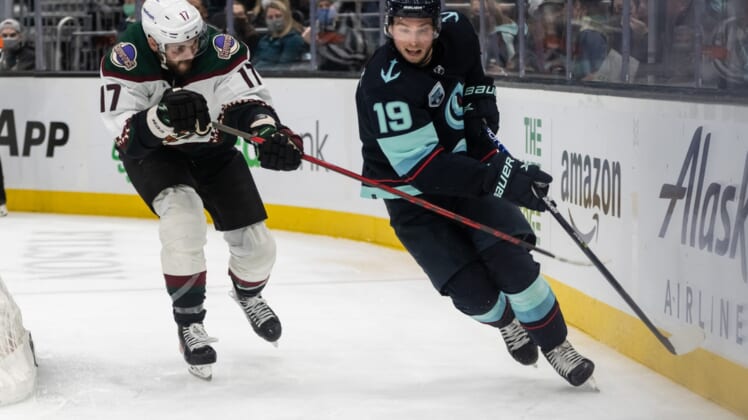 Will the last player leaving Seattle turn out the lights?

The expansion Kraken — tied for the fewest points in the NHL’s Western Conference with the Arizona Coyotes entering Monday, the team they will meet Tuesday night in Glendale, Ariz. — made five deals in the days leading up Monday’s trade deadline, shipping out six players while acquiring one plus 10 draft picks.

“We’re big boys, we know what the expectation is,” Kraken alternate captain Jordan Eberle said. “This is a league that’s based on winning. The business is based on winning. When you’re not doing that, changes have to be made and you have to do what’s best for the organization.”

Kraken general manager Ron Francis started making moves last Wednesday, sending forward Calle Jarnkrok to Calgary for a second-round pick in 2022, a third-rounder in 2023 and a seventh-rounder in 2024.

The biggest deal came Sunday when defenseman Mark Giordano, the Kraken captain, was dealt to his hometown of Toronto along with forward Colin Blackwell in exchange for second-round picks in 2022 and 2023 and a third-rounder in 2024.

“I’ve been happy to be a part of building something here,” Giordano said of his time in Seattle. “To be named captain is something I don’t take for granted. And for the organization to put the ‘C’ on my jersey this year means a lot. I look at a ton of different relationships I made this year. Guys I’d never met before.

“So it’s been a pretty cool experience. I know obviously we didn’t get the results we would have wanted. But I do think there are a lot of positives to take away from the way this thing was built and is being built.”

Later that day, defenseman Jeremy Lauzon went to Nashville for a 2022 second-round pick and forward Mason Appleton returned to Winnipeg, the team Seattle selected him from in the expansion draft, for a fourth-rounder in 2023.

The Kraken finally got a body back Monday when they acquired Daniel Sprong, a fourth-round pick in 2022 and a sixth-rounder in 2023 from Washington for fellow forward Marcus Johansson.

To partially fill the roster void for Wednesday’s game, the Kraken activated forward Joonas Donskoi from the injured-reserve list and called up forward Kole Lind from their American Hockey League affiliate in Charlotte, N.C.

The Coyotes also made moves leading up to the deadline, but perhaps not as many as some expected, with forward Phil Kessel and defenseman Jacob Chychrun staying put.

“In the middle of the ocean. Sail is up. No wind,” Coyotes general manager Bill Armstrong told PHNX last week.

They did send forward Johan Larsson to Washington for a third-round pick in 2023; dealt forward Riley Nash to Tampa Bay for future considerations; claimed Olympic gold-medal winning goaltender Harri Sateri off waivers from Toronto; acquired forward Bryan Little and the rights to center Nathan Smith from Winnipeg for a 2022 fourth-rounder; got center Jack McBain from Minnesota for a 2022 second-rounder; and sent goalie Scott Wedgewood to Dallas for a conditional fourth-rounder.

This will be the third and final meeting between the teams this season. The Coyotes won 5-4 at home on Nov. 6 and 5-2 at Seattle on Feb. 9.

The Coyotes have lost two in a row, including a 4-2 defeat Sunday at San Jose. The Kraken defeated visiting Detroit by the same score Saturday, rallying from a two-goal deficit in the third period as Yanni Gourde tallied twice.