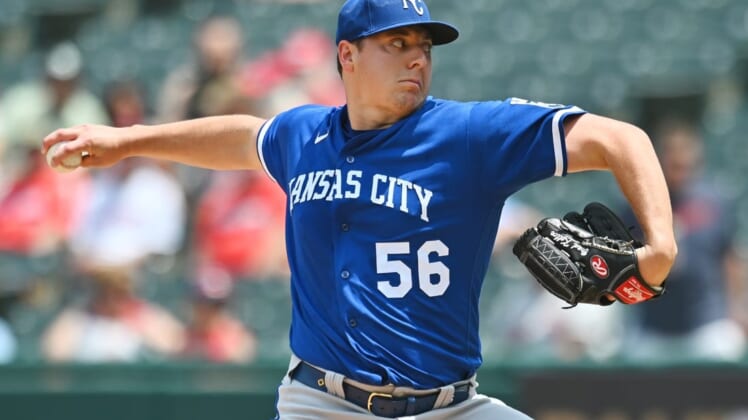 Konnor Pilkington earned his first major league victory and combined with three other Cleveland pitchers on a seven-hit shutout in the Guardians’ 4-0 victory over the Kansas City Royals on Wednesday.

The Guardians completed a three-game sweep of Kansas City.

The Royals have lost 11 of their last 13 games and own the worst record in the major leagues.

Pilkington (1-0) earned his first major league victory in his third career start for Cleveland. He pitched five innings and allowed five hits and two walks. The lefty struck out a career-high eight batters.

The Guardians struck first in the third inning. Rookie Richie Palacios got the first hit off Brad Keller and moved to second on a two-out walk to Steven Kwan. Amed Rosario followed with a run-scoring single to center for a 1-0 advantage.

Pilkington dodged a bullet in the fourth when he wiggled out of a bases-loaded jam. He fanned Emmanuel Rivera and induced Nicky Lopez to ground out to end the inning.

Cleveland manufactured a run in the bottom of the fourth. Andres Gimenez drove in Owen Miller with a single to center for a 2-0 lead. Miller reached on a fielder’s choice and moved to second when rookie sensation Bobby Witt Jr. booted a potential double-play grounder that would have ended the inning though he still got an out at first. Gimenez followed with his clutch single.

The Guardians scored for the third consecutive inning in the fifth. Luke Maile walked and moved to second on Kwan’s single. He advanced to third on Rosario’s fly ball to right and scored on Jose Ramirez’s dribbler to first base. It was his major league leading 52nd RBI.

Cleveland’s lead grew to 4-0 in the sixth when Gimenez doubled and scored on Palacios’ single.