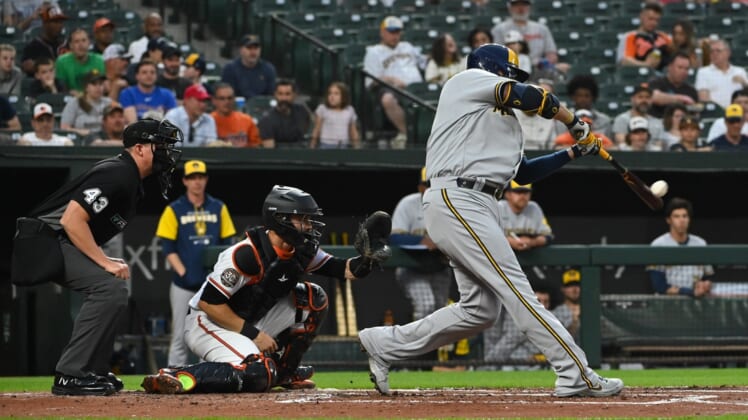 Kolten Wong ripped a go-ahead RBI double in the ninth inning to fuel the visiting Milwaukee Brewers to a 4-2 victory over the Baltimore Orioles on Wednesday.

Hunter Renfroe, who had an assist in right field on an inning-ending double play in the seventh, ripped a single off former Brewer Jorge Lopez (0-1) with one out in the ninth. Wong’s double into the right-field corner allowed Renfroe to beat the throw home and give Milwaukee a 3-2 lead.

Rowdy Tellez provided insurance later in the inning with his second RBI double of the game. Tellez also scored on Mike Brosseau’s two-out single in the second for the Brewers, who answered a 2-0 setback in the opener on Monday by winning the final two games of the series.

Wednesday’s late uprising made a winner out of Brad Boxberger (1-0), who retired the two batters he faced to end the eighth inning.

Maryland native Josh Hader worked around a leadoff walk to retire the side in the ninth and secure his third save of the season and second in as many nights.

Baltimore’s Ryan Mountcastle had an RBI single and pinch-runner Ryan McKenna scored on Trey Mancini’s sacrifice fly in the eighth inning. The Orioles have been outscored 24-12 en route to losing five of six games this season.

Keston Hiura worked a one-out walk off John Means in the second inning before coming around to score the game’s first run two batters later after Tellez doubled to deep center field. Tellez didn’t stay on second base for long, as he ran through third-base coach Jason Lane’s stop sign and hustled home on Brosseau’s RBI single to center field.

Means settled down from there, retiring the next seven batters he faced. He permitted two runs on as many hits in four innings before exiting after just 51 pitches due to left forearm tightness.

Devin Williams replaced Burnes and put the first two runners on base to start the eighth inning. Mountcastle’s one-out single to center field plated Jorge Mateo to trim the Brewers’ lead to 2-1, and Mancini’s fly ball was just deep enough to score McKenna from third base to forge a tie.