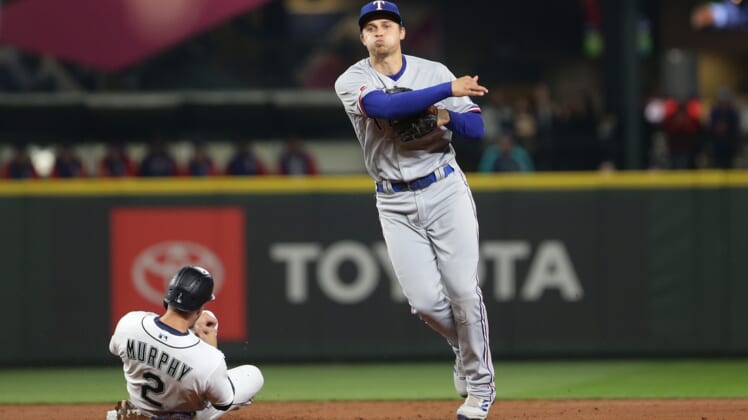 Kole Calhoun doubled home the tiebreaking run with two outs in the top of the ninth inning as the Texas Rangers rallied from an early five-run deficit to defeat the host Seattle Mariners 8-6 Thursday night.

Nick Solak hit a two-run homer for the Rangers, who snapped a five-game losing streak.

Rangers reliever Joe Barlow (1-0) got out of a bases-loaded jam in the eighth and pitched a 1-2-3 ninth for his first major-league victory.

The Mariners tied the score at 6-6 against Matt Bush in the eighth. With one out, Adam Frazier and Ty France drew back-to-back walks before Jesse Winker fouled out. Eugenio Suarez lined the next pitch to center field to score Frazier.

Barlow replaced Bush and walked J.P. Crawford to load the bases, but got Tom Murphy on a called third strike to end the inning.

France and Crawford hit home runs in a five-run first inning for the Mariners.

The Rangers responded with two runs in the top of the second. With one out, Nathaniel Lowe singled and, an out later, Andy Ibanez and Eli White hit back-to-back, run-scoring doubles.

The Rangers took the lead with four unearned runs off Mariners left-hander Marco Gonzales in the fifth inning.

Mitch Garver reached on a fielding error by Crawford and scored on Garcia’s double to left. After a conference at the mound, Solak lined Gonzales’ next pitch over the left-field wall to give Texas the lead.

Gonzales allowed six runs – two earned – on six hits in 4 2/ 3 innings. He walked one and struck out six.