Future Hall of Famer and five-time NBA champion Kobe Bryant is so beloved around the basketball world that one person was willing to dole out six figures for the sweaty jersey he wore at this year’s All-Star Game.

Yes, this actually did happen: 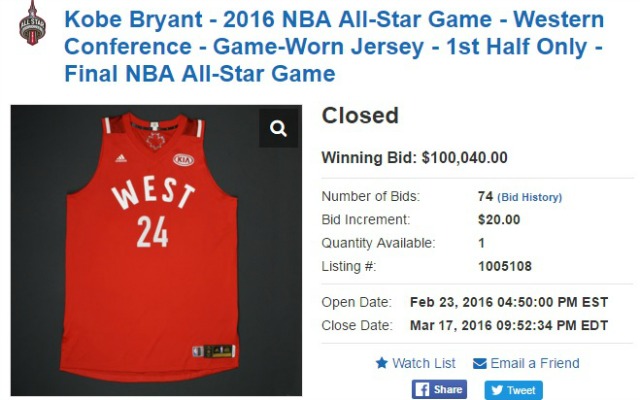 Bryant, 37, scored 10 points during the mid-season all-star game while finding himself the toast of Toronto during the weekend of festivities. It was Bryant’s 17th consecutive All-Star Game appearance and the 18th of his Hall of Fame-worthy 20-year career.

Instead of getting this piece of attire dry-cleaned as to avoid wearing Kobe’s sweat, we are pretty sure whoever spent $100,000 on it will decide to frame the jersey.

This just goes to show us how popular Bryant remains as he plays his final few handful of games prior to retiring at the end of the season.