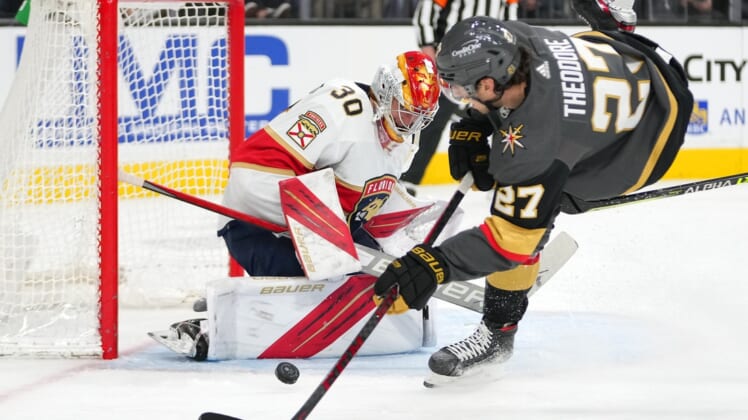 Nicolas Roy scored the go-ahead goal with 6:37 remaining and Logan Thompson made 33 saves as the Vegas Golden Knights snapped a five-game losing streak with a 5-3 victory over the Florida Panthers on Thursday in Las Vegas.

Eichel got hit in the right wrist area blocking a MacKenzie Weegar shot with five minutes to go in the second period. He went to the locker room briefly, bent over and holding his arm, before returning to finish the period.

Florida took a 1-0 lead at the 8:04 mark of the first period. Verhaeghe beat Alex Pietrangelo to a rebound on the right side of the goal and then backhanded in a rebound for his 21st goal of the season.

Vegas tied it near the end of the period. Howden’s shot from the left wing deflected off the skate of Weegar and past Knight’s glove side for his ninth goal of the season, matching his career high.

The Golden Knights took a 3-1 lead in the second period on a pair of goals by Dadonov. The first came at the 5:38 mark when he rushed up the right wing and then cut into the slot where he slapped a shot past Knight’s blocker side. The second came on a power play when he deflected Shea Theodore’s point shot past Knight’s glove side at 14:32.

Bennett roofed an Anthony Duclair pass into the top right corner of the net for his 25th goal of the season to cut it to 3-2 at 17:38 of the second period. On a power play at 12:26 of the third period, Reinhart scored his 23rd goal of the season when he deflected Ekblad’s one-timer from the right point under the crossbar.

Vegas regained the lead just 57 seconds later on Roy’s breakaway goal, his 12th of the season.

Karlsson sealed it with an empty-netter with 1:50 to go, his first goal in 16 games and eighth of the season.