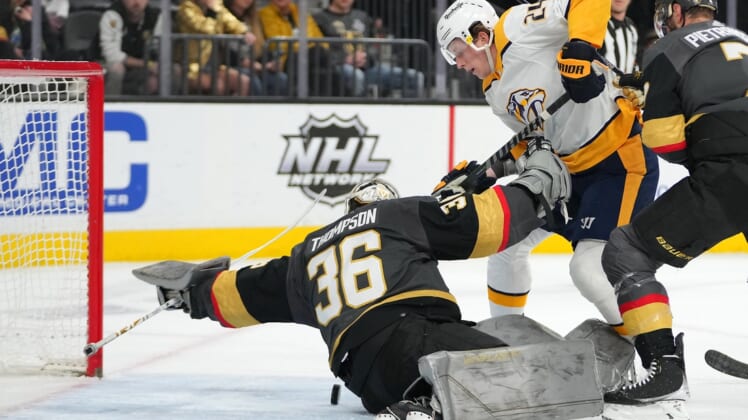 Chandler Stephenson and Evgenii Dadonov each had a goal and two assists and Logan Thompson made 35 saves as the Vegas Golden Knights cruised to a 6-1 victory over the Nashville Predators in Peter DeBoer’s 1,000th game as an NHL head coach on Thursday night in Las Vegas.

Jack Eichel, Alex Pietrangelo and Nicolas Roy each had a goal and an assist, Jonathan Marchessault had three assists and Mattias Janmark also scored a goal for Vegas, which snapped a two-game losing streak and won for only the third time in its last 10 games.

The Golden Knights remained one point behind Dallas for the final wild-card spot in the Western Conference.

Filip Forsberg scored for Nashville and Roman Josi had an assist to extend his point streak to 12 games. Juuse Saros finished with 44 saves.

Vegas, coming off back-to-back shutout losses at Minnesota and Winnipeg, jumped out to a 1-0 lead after just 91 seconds when Janmark deflected Pietrangelo’s point shot past Saros for his ninth goal of the season. It ended a scoreless drought of 122:43 for the Golden Knights.

Roy made it 2-0 at the 13:45 mark with a spinning shot from the right circle that went past Saros’ blocker and inside the far post for his 13th goal of the season.

Dadonov, who rejoined the team after a trade on Monday to Anaheim was nixed by NHL because it violated Dadonov’s limited no-trade clause, made it 3-0 early in the second period with a power-play goal, backhanding in a rebound in the slot for his 16th goal of the season.

Nashville cut it to 3-1 five minutes into the period with a power-play goal as Josi rushed up the left side and then hit Forsberg alone by the right side of the goal. Forsberg then tapped it into the wide-open net for his career-best 36th goal of the season.

Eichel put the Golden Knights back up by three goals less than four minutes later with his sixth goal of the season on a power play, firing a wrist shot from the edge of the left circle inside the near post. Stephenson and Pietrangelo blew the game open with goals in the final 5:18.

The game was delayed for about 12 minutes near the end of the first period after Vegas center Brett Howden went headfirst into the boards in front of the Predators’ bench on a check by Forsberg.

Howden was taken off the ice on a stretcher. The Golden Knights announced he was in stable condition and undergoing further exams.