Knicks take run of late-season success up against Hornets 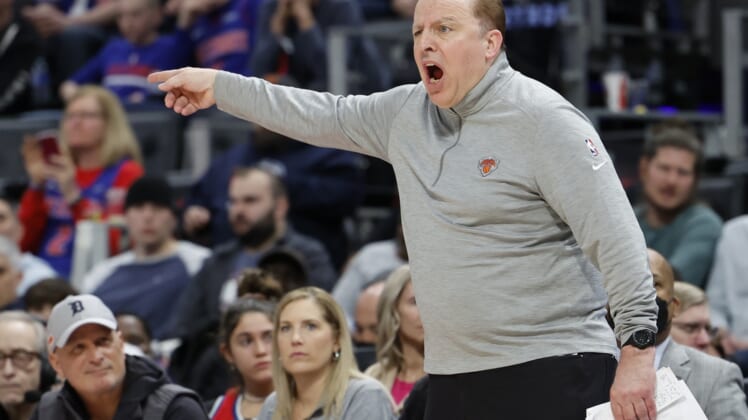 The New York Knicks’ recent surge into the playoff race is bittersweet since it appears to have come too late to extend the season.

But coach Tom Thibodeau is adamant there is value in playing meaningful late-season games for the Knicks, who will try again Wednesday night to do their part to remain in the running for the final Eastern Conference play-in spot when they host the Charlotte Hornets.

Both teams were off Tuesday after playing at home Monday night. The Knicks extended their winning streak to a season-high four games by edging the Chicago Bulls 109-104 and the Hornets fell to the Denver Nuggets 113-109.

The results added a little intrigue to what is shaping up to be a mostly suspense-free race for the final three berths in the play-in tournament. The Knicks (34-42) remained 4 1/2 games behind the 10th-place Atlanta Hawks (38-37), who occupy the final play-in spot, while remaining technically in contention for the eighth and ninth spots as well.

One more loss will likely end any play-in hopes for the Knicks, who will be eliminated from contention by any combination of their own loses and wins by the Hawks that add up to three. It would mark a step backward after the Knicks snapped a seven-year playoff drought last season.

But New York has seven players on the roster 24-years-old or younger, including the trio of RJ Barrett, Mitchell Robinson and Obi Toppin, who combined for 51 points Monday night. Thibodeau believes battling into late March, and perhaps early April, can pay dividends as the team has won nine of 13 following a seven-game losing streak.

The final leg of the regular season is vital for the similarly young Hornets, who also have seven players age 24 or younger as they try and snap the longest postseason drought in the East.

Charlotte, which last qualified for the playoffs in 2016, finished in ninth place in the East during the pandemic-shortened 2019-20 season before finishing in 10th place last year, when it was eliminated from the play-in tournament with a 144-117 loss to the Indiana Pacers.

With six wins in their last eight games, the Hornets have also found success at the right time, though the loss Monday all but ensured they’ll have to take the play-in path. Heading into play Tuesday, Charlotte was 4 1/2 games behind Toronto Raptors and Chicago Bulls, who occupy the final guaranteed playoff spot.

“We’re a young team and it’s playoff push time,” said Hornets forward Miles Bridges, who had 27 points and 11 rebounds Monday. “So we really don’t have time for fatigue.”