Knicks storm back, then hold off short-handed 76ers 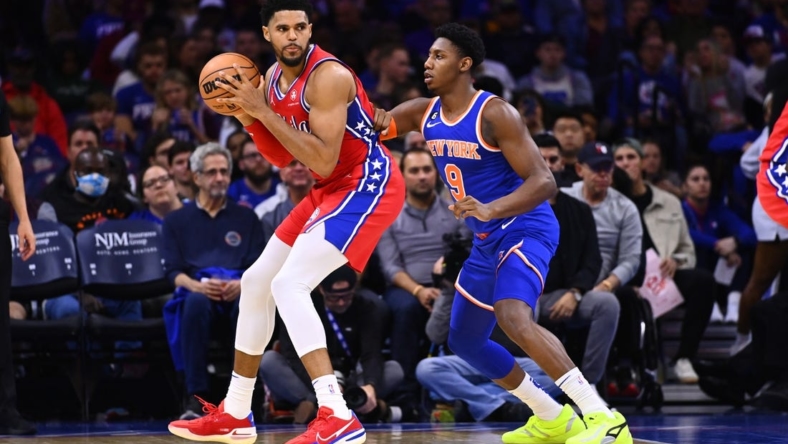 Obi Toppin scored 13 of his 17 points in the fourth quarter and drained the go-ahead 3-pointer with 1:27 left for the visiting New York Knicks, who overcame a 12-point deficit to beat the undermanned Philadelphia 76ers 106-104 on Friday night.

Jalen Brunson scored 23 points and Julius Randle (17 points, 10 rebounds) had a double-double for the Knicks, who snapped a three-game losing streak. RJ Barrett finished with 22 points while Cam Reddish added 11 points off the bench.

Tyrese Maxey scored 31 points and Tobias Harris had 23 points for the 76ers, who have lost two straight. Philadelphia was without defending NBA scoring champion Joel Embiid, who missed a third straight game with a non-COVID illness, as well as James Harden, who suffered a right foot tendon strain Wednesday night that is expected to sideline him the remainder of the month.

Montrezl Harrell had 14 points and De’Anthony Melton added 12 points for the 76ers.

The 76ers held a trio of seven-point leads in the first quarter before the Knicks took a pair of eight-point leads, one late in the second quarter and one early in the third. Philadelphia went on a quarter-spanning 14-2 run — a span in which New York went 0-for-7 with four turnovers — and took its biggest lead at 86-74 on a 3-pointer by Furkan Korkmaz 1:22 into the fourth.

Toppin, who opened the final quarter by missing two 3-pointers and committing a turnover, began the comeback by draining a 3-pointer with 10:15 left for the Knicks, who outscored the 76ers 32-18 the rest of the way. Philadelphia was 5-of-20 from the field with five turnovers following Korkmaz’s 3-pointer.

The Knicks got within one point twice before Toppin’s go-ahead 3-pointer. After a turnover by Maxey, Brunson converted an old-fashioned 3-point play to extend the lead to 100-96 with 1:05 left. The teams then combined to hit 10 of 12 free throws before Georges Niang drilled a 3-pointer with 9.1 seconds left to pull the 76ers within 105-104.

Brunson converted the second of two free throws and Melton missed a 3-pointer with 3.3 seconds left. Brunson tossed the subsequent inbounds pass well beyond half-court to Reddish, who dribbled the clock out.