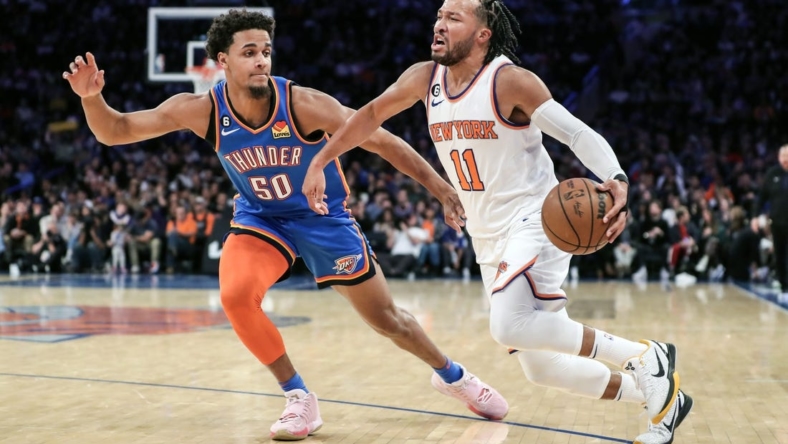 Shai Gilgeous-Alexander scored 17 points during a decisive run to end the third quarter Sunday afternoon for the visiting Oklahoma City Thunder, who rode a red-hot shooting effort to overcome a historic first quarter by the New York Knicks and earn a 145-135 victory.

Gilgeous-Alexander finished with 37 points and Josh Giddey posted a triple-double (24 points, 12 assists, 10 rebounds) for the Thunder, which shot 62.5 percent (55-of-88) — the third-best performance from the field since the franchise moved to Oklahoma City from Seattle prior to the 2008-09 season.

Luguentz Dort scored 24 points while Jeremiah Robinson-Earl (17 points) and Aleksej Pokusevski (12 points) each got into double figures for the Thunder, which has won two straight.

Julius Randle had a double-double (25 points, 10 rebounds) for the Knicks, who scored 48 points — their most ever in the first quarter — before the Thunder caught fire. Oklahoma City’s shooting percentage is the highest by a New York opponent since the Toronto Raptors shot 65 percent in a 131-113 win on April 14, 2010.

Cam Reddish had 26 points while Immanuel Quickley scored 24 points off the bench for the Knicks, who have alternated losses with wins the past seven games. Jalen Brunson scored 17 points while Isaiah Hartenstein added 14 points and Obi Toppin finished with 10.

The Knicks led 48-36 after one but the Thunder chipped away and ended the second quarter on a 24-12 run to take a 79-73 halftime lead. New York got within three points three times in the third quarter before Gilgeous-Alexander sparked a 26-13 run that gave Oklahoma City a 122-106 lead heading into the fourth. The hosts got no closer than eight in the final 12 minutes.