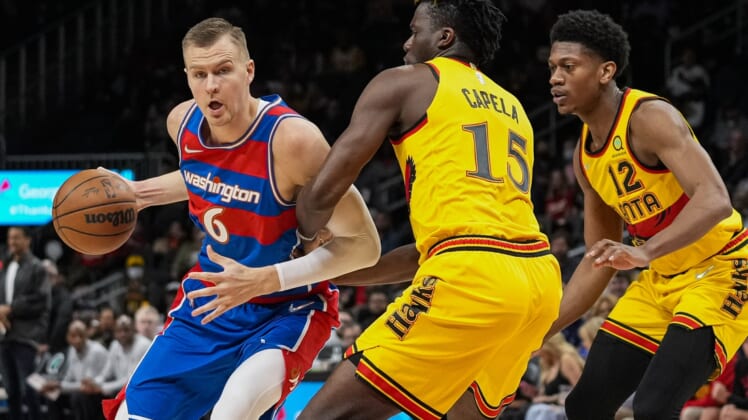 After glimpsing Wednesday night at teams headed for next week’s play-in tournament, the New York Knicks and Washington Wizards will be glancing at mirror images of themselves Friday night when the lottery-bound teams meet in the nation’s capital in the penultimate game of the season.

Both teams were off Thursday after suffering double-digit setbacks Wednesday night, when the host Knicks squandered a 21-point third-quarter lead in a 110-98 loss to the Brooklyn Nets and the visiting Wizards fell 118-103 to the Atlanta Hawks.

The losses provided punctuation marks on disappointing seasons for the Knicks (35-45) and Wizards (35-45), each of whom snapped postseason droughts by qualifying for the main playoff bracket last spring.

The Knicks, who hadn’t reached the playoffs since 2013, were eliminated in the Eastern Conference first round by the Hawks in five games. The Wizards, making their first trip to the postseason since 2018, won a play-in game before losing in five games to the Philadelphia 76ers.

Hopes of a return trip to the playoffs for the Knicks and Wizards were sparked by fast starts last fall, when each team opened 5-1. But the Knicks failed to establish any consistency thereafter and have just six winning streaks since October, none longer than four games.

New York has been over .500 just once since December and saw its postseason aspirations all but end with a seven-game losing streak that bridged the All-Star break.

Following Wednesday’s loss to the Nets — which marked the 15th time this season the Knicks lost a game in which they led by at least 10 points and the fifth time they lost after leading by at least 20 points — coach Tom Thibodeau was left to hope the experiences would benefit a roster that includes seven players 24 or younger.

“Hey, look, those guys over there were once young guys, too — trial and error,” Thibodeau said, referring to Nets stars such as Kyrie Irving, Kevin Durant, Patty Mills and Seth Curry. “You get that through experience. The more we go through it, the better we’ll get at it.”

Washington moved to as many as seven games over .500 (at 10-3 on Nov. 15) before enduring a gradual descent. The Wizards have won back-to-back games just three times since Jan. 1 and fell under the break-even mark for good with a 116-87 loss to the Boston Celtics on Jan. 23.

The loss Wednesday to the Hawks — who are in ninth place in the Eastern Conference — was the 24th in the past 36 games for the Wizards, who are using the final week of the season to experiment with a tall lineup.

The 7-foot-3 Kristaps Porzingis and 6-foot-10 Daniel Gafford again played at the same time Wednesday, when they combined for 38 points one game after they produced 49 points and 20 rebounds in a 132-114 upset of the Minnesota Timberwolves.

“I thought we would be pretty good together,” Porzingis said after the Minnesota win.