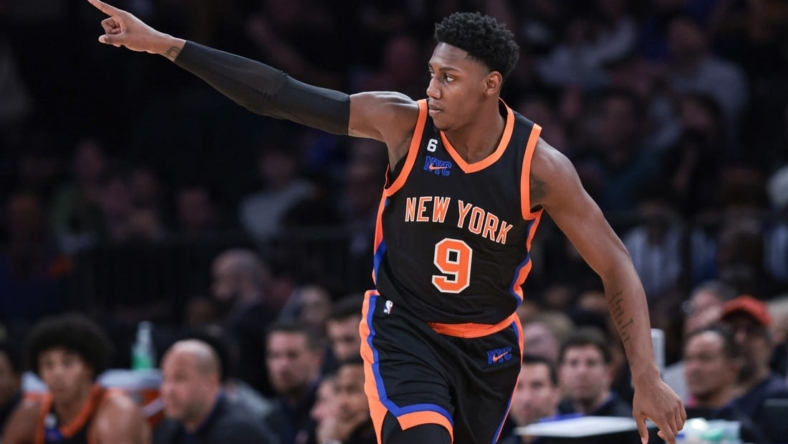 Through 12 games, the only consistent thing about the New York Knicks has been their inconsistency.

The Knicks will look to earn their second straight win for just the second time this season on Sunday afternoon when they host the Oklahoma City Thunder in a matinee.

Both teams were off Saturday after earning wins at home Friday night. The Knicks fended off second-half comeback attempts by the Detroit Pistons in a 121-112 victory while the Thunder led almost wire-to-wire while defeating the Toronto Raptors, 132-113.

The win for the Knicks extended their alternating pattern of wins and losses to six straight games — and, appropriately enough, evened their season record at 6-6. Even the stretches of streaks have been pocked with inconsistency for New York, which followed up a three-game winning streak from Oct. 21-26 by losing three straight from Oct. 28 through Nov. 2.

Consistency remained elusive Friday, even though the Knicks bounced back from their most lopsided defeat of the season, Wednesday’s 112-85 loss to the Brooklyn Nets. New York led the Pistons — a 3-10 team playing Friday without second-year star Cade Cunningham, who missed the game due to a sore left shin — by as many as 17 in the third quarter. But they never buried Detroit, which got within four points on a pair of free throws by Bojan Bogdanovic with 1:20 left.

RJ Barrett, who scored a season-high 30 points, drained a pair of free throws on the Knicks’ next possession. Former New York guard Alec Burks missed a 3-pointer on the Pistons’ subsequent trip up the floor and Immanuel Quickley finally iced the game with a 3-pointer.

“It was very important (to win) — you saw what happened on Wednesday and we needed to bounce back,” Knicks point guard Jalen Brunson said. “We just continued to fight, even though we could’ve closed the game out a little better.”

The Thunder, meanwhile, have yet to alternate wins with losses. The rout of the Raptors snapped a four-game losing streak for Oklahoma City, which opened the season with a three-game losing streak but then won four in a row to move over .500 for the first time since it was 5-4 on Jan. 10, 2021.

On Friday night, the Thunder trailed just once — at 8-6 — while playing their most complete game of the season. Star guard Shai Gilgeous-Alexander scored 20 points, his second-fewest of the season, but a team-record eight players scored in double figures for Oklahoma City.

“He was just very content with choosing his spots and letting his teammates make the plays,” Thunder head coach Mark Daigneault said of Gilgeous-Alexander. “It empowers everybody else and really allows us to develop our team.”

The Thunder scored 70 points in the first half and earned their most lopsided win since a 117-96 defeat of the Phoenix Suns on April 3. Oklahoma City also limited the Raptors to 43.2 percent shooting from the field after allowing opponents to shoot 46.1 percent through the first 11 games.