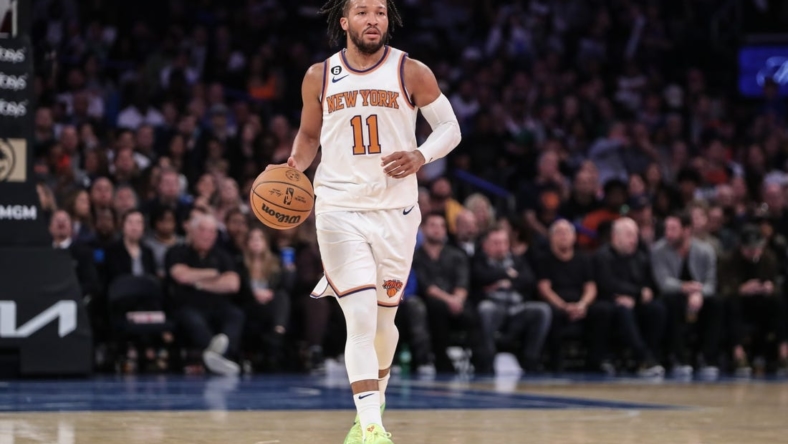 Coming off their worst performance this season, the New York Knicks will get a chance to recover against a team they dominated in their home opener.

New York trailed dysfunctional Brooklyn by as much as 35 points while getting pummeled 112-85 on Wednesday. The Knicks never led, shot 32.2 percent from the field and lost for the fifth time in seven games.

“It’s not OK. It’s something that we need to quickly recover from,” guard Jalen Brunson said. “I’m OK with missing shots, I’m OK with aggressive mistakes, but effort and heart from all of us, that’s what we need. If you go out there and play as hard as we can, do what we can and a team beats us, we’ve got to live with that. But when we know we didn’t go out there with 110 percent, that’s hard to live with. So, no, it’s not OK. … We didn’t play as hard as we could have.”

“They jumped off to a fast start and we just never recovered,” said Randle, who is averaging 28 points over the last three games. “We made a run in the third but it’s tough when you dig yourself a hole like that. It’s unfortunate but you try to throw it in the trash and move on to the next.”

Now the good news for the Knicks — the Pistons are also struggling and looked overmatched when they visited New York on Oct. 21.

The Knicks scored 72 first-half points, shot 52.6 percent for the game and rolled to a 130-106 victory. Their offensive performance against the Nets was the polar opposite.

Detroit is still looking for its first road victory this season. It fell to 0-6 in that category with a 128-112 loss at Boston on Wednesday.

Cade Cunningham, last year’s top draft pick, had a brutal night in which he went 1 for 11 from the field. He only contributed four points, three rebounds and two assists in 24 minutes.

“It was tough. I feel like I was trying to get to my spots, but I just didn’t have the step that I wanted to have,” Cunningham told The Detroit News. “I didn’t have the burst that I wanted to have. They did a really good job of defending, containing. It was just one of those nights. I feel like it was a great learning experience for me, to be in a game like that when things just aren’t going my way.”

Rookie Jaden Ivey and Jalen Duren tried to pick up the slack. Ivey had 19 points, 10 rebounds and six assists, while Duren supplied 10 points and 10 rebounds off the bench.

Alec Burks could make his season debut against his former team on Friday. Burks, traded by the Knicks in a draft-night deal, has been rehabbing from a left foot injury.