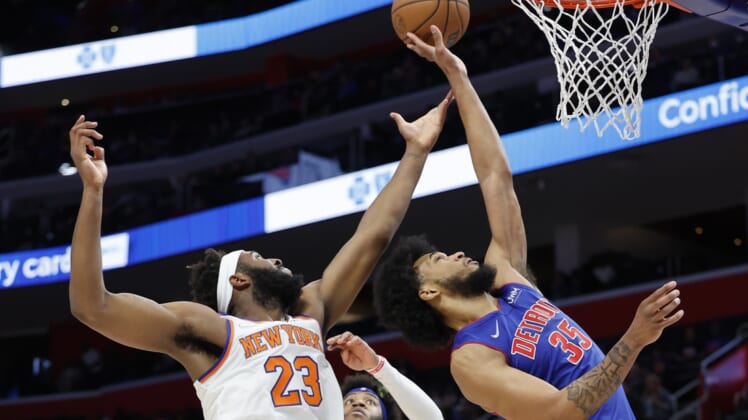 RJ Barrett had 21 points and nine rebounds, and the visiting New York Knicks extended their winning streak to three games with a 104-102 victory over the Detroit Pistons on Sunday.

Marvin Bagley had a season-high 27 points and seven rebounds for the Pistons (20-55). Cade Cunningham had 18 points and seven assists, while Saddiq Bey scored 14 points, and Isaiah Stewart added 10 points and 10 rebounds.

The Knicks reeled off 14 unanswered points in the first quarter to take a 29-14 lead. Quickley hit a pair of 3-pointers during that outburst. New York led by 12, 34-22, when the quarter ended.

New York had a 9-2 run late in the second quarter to increase its lead to 21. Detroit finished the quarter on a 14-5 run to cut the Knicks’ lead to 12, 59-47, by halftime. Barrett led the Knicks with 14 first-half points, while Bagley topped the Pistons with 17.

A Detroit spurt early in the third quarter cut New York’s lead to 61-59. The Knicks maintained a slim lead the rest of the quarter but led by just one, 80-79, heading into the fourth.

Detroit evened the score at 83 on a Killian Hayes jumper. It was 90-apiece when the Knicks went on a 7-0 run. Randle started it with his layup, then knocked down a 3-pointer. Barrett followed with a layup before Bagley answered with a corner 3-pointer.

Bey made two free throws with a minute left to cut New York’s edge to 101-100. Burks then hit a 3-pointer after a timeout.

Hayes then made a layup and Barrett missed in the lane. Cunningham got the ball after a timeout, but Burks stripped it out of his hands to clinch the Knicks’ victory.