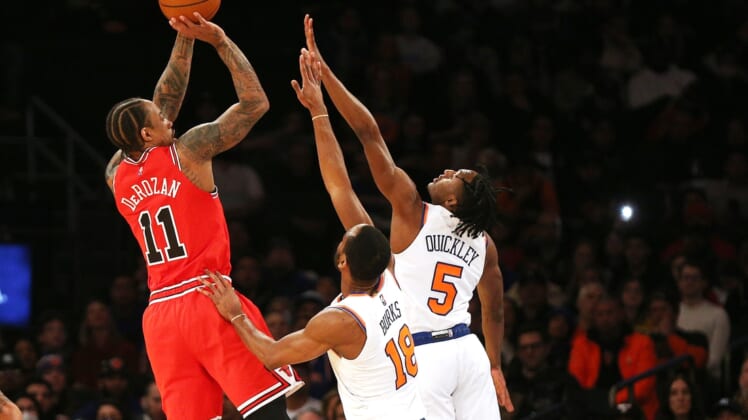 RJ Barrett scored a team-high 28 points and Alec Burks finished with 27 points, including the clinching 3-pointer late in the fourth quarter, as the host New York Knicks kept their flickering playoff hopes alive Monday night by fending off the Chicago Bulls, 109-104.

Mitchell Robinson amassed 16 points and 12 rebounds for the Knicks (34-42), who won their season-high, fourth straight to remain 4 1/2 games behind the Atlanta Hawks in the race for 10th place in the Eastern Conference and the final spot in the play-in tournament.

Obi Toppin added 17 points off the bench for the Knicks.

DeMar DeRozan scored 15 of his 37 points in the fourth quarter for the Bulls (43-32), who squandered an early 12-point lead as they lost for the 11th time in 15 games. Zach LaVine had 27 points, Nikola Vucevic contributed 16 points and 13 rebounds, and Ayo Donsunmu added 10 points.

The Bulls led by as many as 11 points in the first and ended the quarter with a 28-24 lead. DeRozan then scored the first seven points in a quarter-opening 9-1 run in the second as Chicago took its biggest lead at 37-25.

Back-to-back 3-pointers by Toppin soon sparked a 22-6 run by the Knicks, who took the lead for good when Burks scored five straight points to turn a one-point deficit into a 49-45 lead with 3:08 left in the half.

The Knicks quickly expanded their 53-50 halftime lead by scoring the first nine points of the third quarter.

Barrett completed a three-point play to give New York its biggest lead at 65-52 with 9:29 left in the third.

The Bulls cut the deficit to one point three times late in the fourth. DeRozan missed jumpers that could have given Chicago the lead with 3:11 to go and again with 46.7 seconds left, each time with New York up by one.

After the latter miss, Burks drained a 3-pointer from the corner with 23.2 seconds left. Following a timeout by Chicago, Burks drew a charge to negate a potential three-point play by DeRozan.