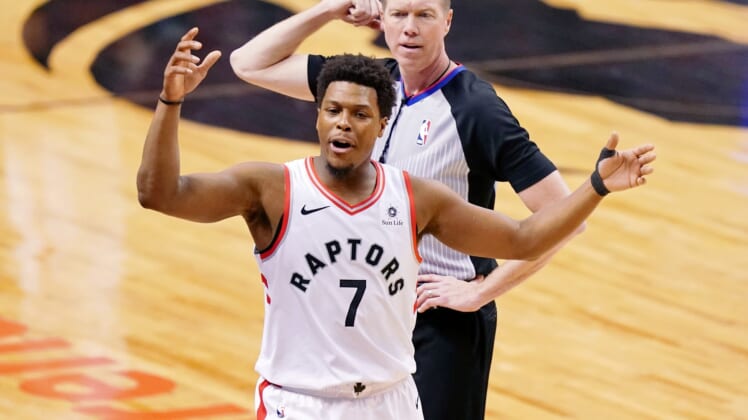 With his Toronto Raptors two wins away from a first ever NBA title, the pressure is on star guard Kyle Lowry heading into Game 4 of the Finals Friday evening.

But this almost wasn’t the case. In a recent detailed article covering Lowry’s up-and-down relationship with the Raptors, Frank Isola of The Athletic noted that he was almost traded to the New York Knicks back in 2013.

“According to multiple sources familiar with the negotiations, the trade that would have sent Lowry to the Knicks in December of 2013 was vetoed at the last minute by MSG Chairman James Dolan,” Isola noted.

The specifics of the deal are known. And they’re staggering. According to the report, New York would have sent Metta World Peace and Iman Shumpert as well as a 2018 first-round pick up north.

Talk about franchise-altering for both sides. Lowry has remained the one constant in Toronto as his team has run off four consecutive 50-plus win seasons.

Despite struggling in the playoffs, Lowry upped his game big time as the Raptors took a 2-1 series lead against Golden State Wednesday night.

On the other hand, New York has been a complete disaster since this ill-fated trade fell through. The Knicks finished that 2013-14 season with a 37-45 record — its best mark over the past six years.

World Peace played overseas in China the following season while Shumpert never lived up to his billing as a first-round pick prior to being moved to the Cleveland Cavaliers.

The moral of this story? For the Toronto, the best moves are those that were never completed. For the Knicks, James Dolan remains a black eye for the long-downtrodden organization.