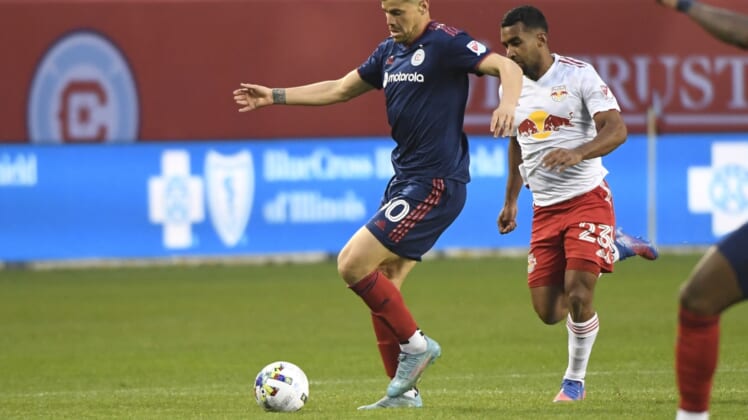 Patryk Klimala scored twice, including on a penalty kick in the 91st minute, to complete a comeback over a rain-drenched turf as the visiting New York Red Bulls defeated the Chicago Fire 2-1 on Saturday in a wild Eastern Conference match.

The Fire were forced to play the final seven minutes and added time with just nine men after Rafael Czichos was assessed a second yellow card at the 83rd minute mark. Jhon Duran had already been sent off for Chicago for a second yellow in the 80th minute.

The Fire, which had gone scoreless in their past three matches, jumped to the lead in the 16th minute when Xherdan Shaqiri scored on a penalty kick after the Red Bulls’ Ashley Fletcher was whistled for a hand ball in the penalty area.

New York looked to have tied the game a minute later as Lewis Morgan volleyed in a free kick, but the goal was waved off when VAR determined that the Red Bulls’ Aaron Long was offside.

The match was delayed by torrential rains for an hour and 21 minutes with two minutes to play in the first half. Once the teams returned to the field, they finished the half and five minutes of added time and had just a three-minute break for halftime.

Klimala tied the match in the 75th minute after taking a pass from Lucas Linhares. Linhares carried the ball deep into the zone down the right side through the standing water before finding Klimata at the near post. It was the first goal allowed at home by Chicago in five matches this season.

Klimala then produced the decisive goal after VAR confirmed that he had been fouled in the penalty area by Miguel Angel Navarro in the 86th minute.