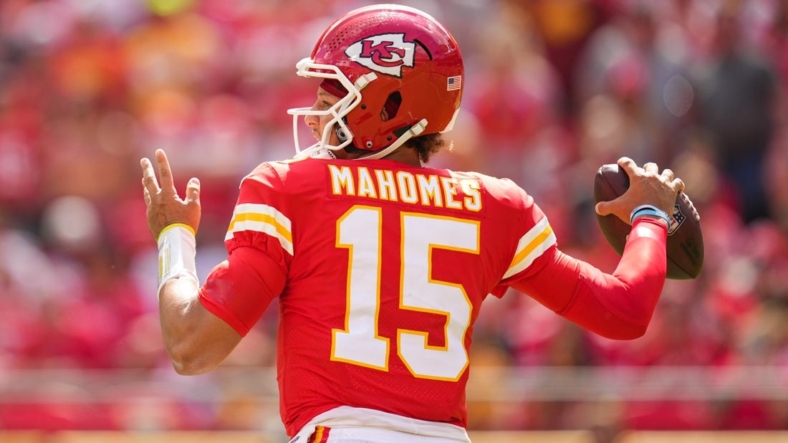 Over the last four seasons, the NFL has witnessed Kansas City Chiefs quarterback Patrick Mahomes’ capabilities on a first-hand basis.

However, no one knows them more than Arizona Cardinals head coach Kliff Kingsbury, who recruited Mahomes to Texas Tech. Now, he has to coach against him for the first time in the 2022 season opener when his Cardinals clash with the Chiefs in Glendale, Ariz., on Sunday.

Admitting “it’ll be a little surreal going against him,” Kingsbury remains proud of what Mahomes has accomplished on and off the field.

“Just really proud of the person,” Kingsbury said. “Just watching how he’s grown up, the leadership qualities he shows on and off the field. I mean, anytime you watch him in any of those arenas, just how socially responsible he is, how he leads, how he treats people, the stuff he does in the community with charities, and he runs the gamut of what you want a sports star to be like and carry himself. And so that’s been really special to watch that development.”

Kingsbury, of course, has watched the development of his own quarterback, Kyler Murray, who enters his fourth season after signing a five-year, $230 million contract extension a few days before the beginning of training camp.

While Chiefs head coach Andy Reid will be preparing Mahomes and the offense to go against a depleted group of Arizona cornerbacks, defensive coordinator Steve Spagnuolo will have his hands full with Murray, even with wide receiver DeAndre Hopkins serving a six-game league suspension for a PED violation.

They hope defensive end Frank Clark and defensive tackle Chris Jones will lead their teammates and keep Murray from destroying the game plan.

“Well, you have to say discipline, obviously,” Reid said when asked about what he expects from the defensive line. “Speed becomes important. (Murray’s) got speed, so there’s a runner. So keeping them contained I think is important. As you work through it, that discipline becomes a big factor.

“But you always want the aggressiveness, you want speed, you want that transition between the run and the pass to be aggressive and fundamentally sound.”

Chiefs first-round pick Trent McDuffie is expected to start at one cornerback spot, and the secondary will have to deal with lightning-fast wide receiver Marquise Brown, acquired by the Cardinals on draft day from the Ravens for a first-round pick.

Meanwhile, the Chiefs moved on from wide receiver Tyreek Hill in the offseason, and while Mahomes still has tight end Travis Kelce as his security blanket, he hopes to exploit Arizona’s cover corners by utilizing holdover Mecole Hardman, veteran additions JuJu Smith-Schuster and Marquez Valdes-Scantling and second-round rookie Skyy Moore.

The Cardinals’ cornerback conundrum occurred after the death of Jeff Gladney in May and the recent loss of Antonio Hamilton for at least four games because of burns following a kitchen accident.

Byron Murphy Jr. and Marco Wilson are expected to start, but Wilson had issues in camp and the depth behind them includes recent trade acquisition Trayvon Mullen Jr. and waiver-wire pickup Javelin Guidry.

Another significant concern for the Cardinals is injuries.

The Chiefs listed no players as not practicing or limited for Wednesday’s practice, while the Cardinals had eight.