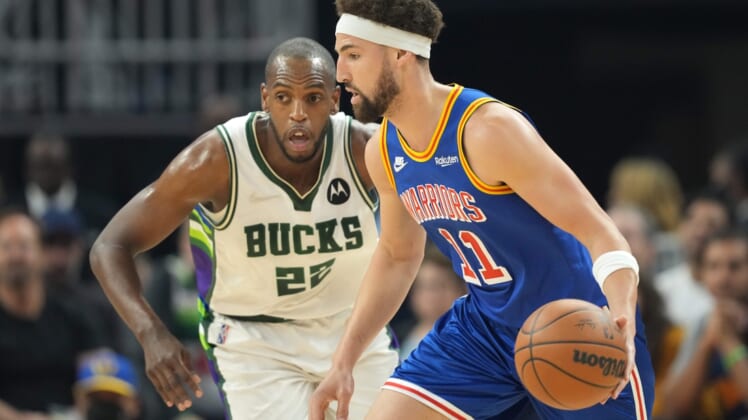 Klay Thompson turned back the clock with his most points since before his two season-ending injuries, using eight 3-pointers as the foundation for a 38-point explosion that propelled the Golden State Warriors past the visiting Milwaukee Bucks 122-109 Saturday night in San Francisco.

In a battle of NBA heavyweights, Jordan Poole chipped in with 30 points, Andrew Wiggins added 21 and Jonathan Kuminga recorded his second professional double-double as the Warriors won a third straight despite getting just eight points from Stephen Curry.

Giannis Antetokounmpo had a team-high 31 points and Khris Middleton 18 for the Bucks, who buried 17 3-pointers but nonetheless were outscored 54-51 from beyond the arc by the hot-shooting Warriors.

Thompson, who suffered a ruptured Achilles in Game 6 of the 2019 NBA Finals against the Toronto Raptors, missed the entire 2020 and 2021 seasons, the latter after tearing his ACL while rehabbing the Achilles injury.

His previous high this season in 21 games had been 33 against the Los Angeles Lakers exactly one month ago on Feb. 12.

Poole was nearly equally brilliant, shooting 9-for-16 from the field and 5-for-10 from deep en route to his seventh 30-point game of the season. He missed a season high — 33 against Toronto in November — by three points.

The Warriors shot 48.4 percent overall and 40.0 percent on 3-pointers in avenging a 118-99 blowout at Milwaukee in January.

Kuminga’s double-double featured a game-high and season-best 11 rebounds to go with 14 points.

Curry aided the cause with a game-high eight assists on a night when he attempted just seven shots.

Antetokounmpo got to the free-throw line 18 times — three more than the entire Warriors team — and used 12 foul-shot points to raise his point total over 30 for the 28th time this season.

He also found time for a team-high eight rebounds.

Serge Ibaka (15 points), Jrue Holiday (13) and Grayson Allen (12) also scored in double figures for the Bucks, who saw a six-game winning streak come to an end in the opener of a four-game Western swing.