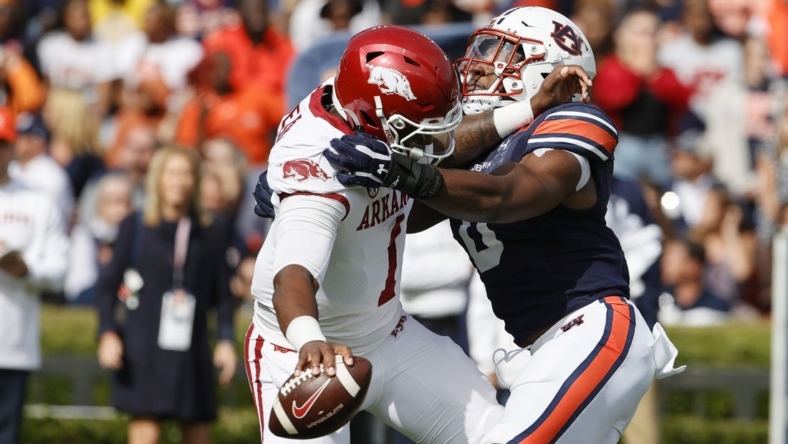 Arkansas quarterback KJ Jefferson ran for two touchdowns and threw for another to lead the Razorbacks to a 41-27 victory over host Auburn in a Southeastern Conference game on Saturday.

Jefferson went 16-for-24 passing for 234 yards with no interceptions and added scoring runs of 1 and 13 yards to finish with 45 yards on 10 carries.

Matt Landers had four catches for a game-high 115 yards, and Jadon Haselwood finished with five receptions for 61 yards and a touchdown.

Robby Ashford went 24-for-33 passing for 285 yards with a touchdown and no interceptions. He also rushed for a team-high 87 yards on 19 carries for the Tigers, who have lost four straight games.

Tank Bigsby added 63 yards, including a 41-yard touchdown run in the second quarter, on 11 carries. He also had a team-high six receptions for 37 yards.

Leading 17-13 at halftime, Jefferson found Haselwood over the middle for an 11-yard touchdown to give the Razorbacks a 24-13 lead with 6:02 left in the third quarter.

The Razorbacks effectively put the game away on their next possession. Dubinion’s 2-yard run capped a seven-play, 94-yard drive to extend the lead to 31-13 with 44 seconds left in the third quarter.

After Auburn took a 3-0 lead on Anders Carlson’s 46-yard field goal midway through the first quarter, the Razorbacks took the lead for good on their ensuing drive.