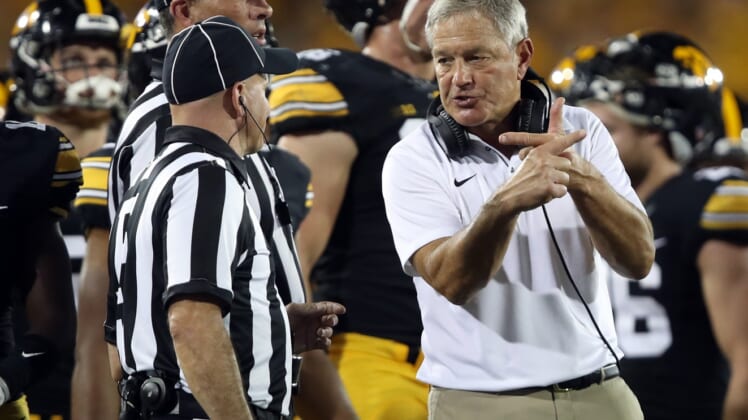 The Iowa Hawkeyes celebrated a big win over Nebraska on Friday to win the Heroes Trophy, but head coach Kirk Ferentz had to deal with a little pain and blood during the celebration.

As Ferentz celebrated with his players on the field after a game-winning field goal, he was accidentally head-butted by starting quarterback Nate Stanley Jr. Fortunately, he fought through the pain and gave a great interview all while looking like an MMA fighter in the process.

He got headbutted in the postgame celebration, but the @HawkeyeFootball head coach didn't let that ruin the interview: pic.twitter.com/vWIB0kU7CR

The elation from winning certainly had to help the veteran coach forget about the busted lip. Winning has become a tradition as of late for Ferentz with four consecutive eight-win seasons after Saturday’s win.

It also helps that Ferentz received a $500,000 bonus for Iowa’s big win on Friday. $500K should be more than enough to buy some ice to tend to that busted lip and it should help with even more celebrating too.