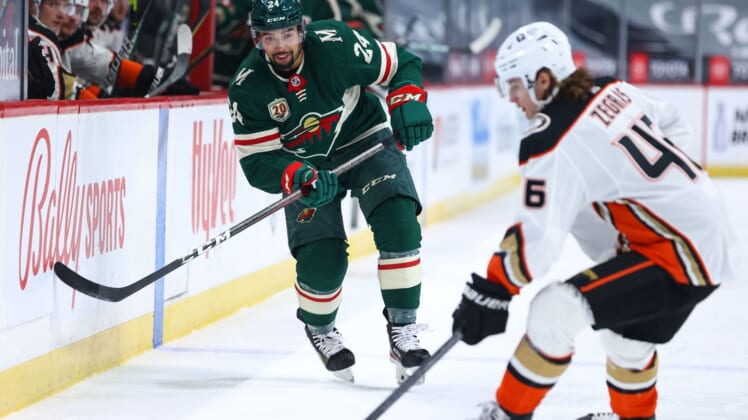 Kirill Kaprizov scored off his own rebound 17 seconds into overtime to lift the Minnesota Wild to a 4-3 win against the Anaheim Ducks on Friday night in St. Paul, Minn.

Kaprizov and Joel Eriksson Ek each had a goal and an assist, Victor Rask and Nico Sturm also scored, and Kaapo Kahkonen made 22 saves for the Wild (34-14-5, 73 points).

Adam Henrique had a goal and an assist, Max Comtois and Derek Grant also scored, and John Gibson made 32 saves for the Ducks (17-30-8, 42 points).

Grant scored off a feed from just below the goal line from Henrique to tie the score for the third time 3-3 at 14:14 of the third period.

Comtois scored his team-leading 15th goal of the season to give the Ducks a 1-0 lead at 7:11 of the first period.

Comtois found an opening in the middle of the ice and Trevor Zegras hit him with a long pass to spring a breakaway. Comtois elected to shoot from the inside edge of the right circle as a Minnesota defender closed in.

Rask tied it 1-1 less than a minute later after Gibson played the puck behind the net, but it went to Mats Zuccarello.

He passed it to Kaprizov on the opposite side behind the Anaheim net and he quickly sent a pass out front to Rask, who scored at 8:06, giving him five points (two goals, three assists) in the past five games.

Minnesota’s second goal also originated behind the Anaheim net, as Nick Bonino slid a pass out front to Sturm, who made it 2-1 at 18:26 of the first period.

Rask slipped as he was pressured by Henrique in the Wild zone. The puck went off Kahkonen, but he was unable to cover it before Henrique skated in and pushed it across the goal line.

Ducks defenseman Kevin Shattenkirk turned the puck over in his own zone, and Eriksson Ek put in a rebound after Gibson made a save on Marcus Foligno to give the Wild a 3-2 lead at 12:01 of the third.