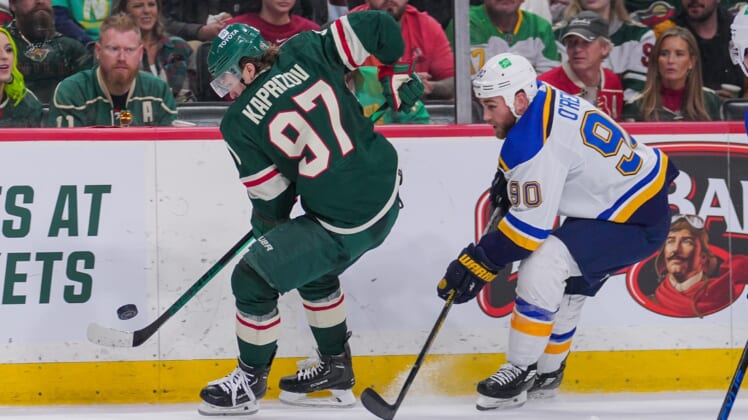 Kirill Kaprizov had a hat trick and Joel Eriksson Ek had two goals and an assist to lead the Minnesota Wild to a 6-2 victory over the visiting St. Louis Blues in Game 2 of their first-round Stanley Cup playoff series on Wednesday in Saint Paul, Minn.

The series is now tied 1-1, with Minnesota bouncing back from a 4-0 shutout loss in Game 1. Game 3 is set for Friday in St. Louis.

Kaprizov scored on an even-strength play, on the power play, and on an empty net for the first postseason hat trick in Wild franchise history. Kaprizov had only three points (two goals, one assist) in eight previous career playoff games.

It was also a milestone night for Eriksson Ek, who had only five points (three goals, two assists) in his 20 previous Stanley Cup playoff games.

Marc-Andre Fleury stopped 32 of 34 shots. It was the 91st playoff win of Fleury’s career, putting him one victory behind Grant Fuhr for third place on the all-time list.

Vladimir Tarasenko had a goal and an assist for St. Louis, and Robert Thomas had two assists. Jordan Kyrou scored the Blues’ other goal.

Opponents had scored just two goals in 38 opportunities against the outstanding St. Louis penalty-kill unit over Game 1 and the Blues’ last 18 regular-season games. It took the Wild just over six minutes in the first period to match that two-goal total, with Gaudreau and Kaprizov both scoring with the extra attacker.

The Wild were 2-for-3 on power plays, and 4-for-5 on the penalty kill. It was a stark contrast to the lopsided special-teams battle in Game 1, when Minnesota went scoreless on six power-play chances and allowed the Blues to score twice with the man advantage.

Blues defenseman Robert Bortuzzo didn’t return to the game after sustaining an upper-body injury in the first period. An Eriksson Ek shot seemed to hit Bortuzzo in the head after Bortuzzo slid to block the puck.