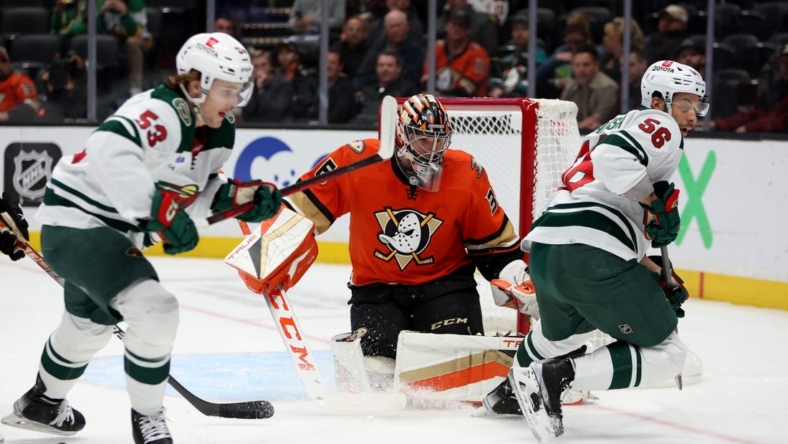 Kirill Kaprizov scored a pair of power-play goals and the visiting Minnesota Wild scored the final four goals of the game en route to a 4-1 victory over the Anaheim Ducks on Wednesday night.

Matt Dumba and Joseph Cramarossa also scored for Minnesota, which extended its win streak against the Ducks to 11 games. Filip Gustavsson made 31 saves for his first win in four decisions this season.

Following a scoreless first period that saw Minnesota’s Joel Eriksson Ek backhand a shot off the right post that slid across the front of the goal line behind Gibson and out, Anaheim appeared to take a 1-0 lead early in the second period on a lacrosse-style backhand goal by Trevor Zegras. But the score was later taken off the scoreboard when the Wild successfully challenged that Ducks defenseman Dmitry Kulikov was offside prior to the goal.

Regenda, playing in his sixth NHL game, then gave the Ducks a 1-0 lead at the 13:24 mark when he fired a snap shot from the high slot off the stick of defenseman Calen Addison past Gustavsson’s glove side for his first career goal.

Minnesota tied it at the 16:37 mark on a power-play goal by Kaprizov, snapping a 159-minute, 45-second goalless drought for the Wild in the process. Matt Boldy fired a shot from the right point that Kaprizov redirected in off the hip of Kulikov and inside the right post.

Dumba gave Minnesota a 2-1 lead early in the third period when he roofed Mason Shaw’s pass from the left corner for his first goal of the season.

The Wild, taking advantage of a 5-on-3 power play, made it 3-1 less than two minutes later on Kaprizov’s 10th goal of the season. Mats Zuccarello and Kaprizov set up behind the goal and passed the puck back-and-forth before Kaprizov quickly tucked in a shot around the right post for his fifth power-play goal of the season.

Cramarossa then extended the lead to 4-1 with his first goal since Feb. 14, 2017, when he was playing for Anaheim against Minnesota.