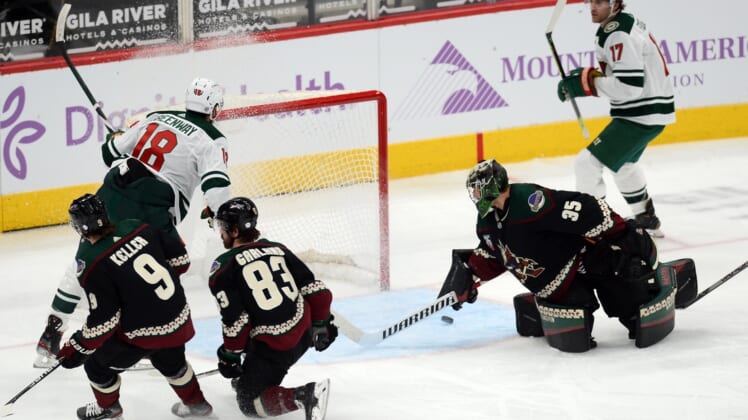 Kirill Kaprizov broke the single-season franchise record for points by a rookie to help the Minnesota Wild earn a 5-2 win over the Arizona Coyotes on Monday in Glendale, Ariz.

Kevin Fiala had a goal and an assist while Cam Talbot made 22 saves for the Wild, who have won four in a row. Kaprizov, Jordan Greenway, Marcus Johansson and Jonas Brodin also scored for Minnesota, and Nick Bonino and Matt Dumba added two assists apiece.

Christian Fischer and Alex Goligoski scored and Darcy Kuemper made 19 saves for Arizona. The Coyotes are in fourth place in the West Division, but only one point ahead of the St. Louis Blues, who have played three fewer games.

Kaprizov broke the team’s rookie record set over 71 games by Marian Gaborik in 2000-01.

Fischer took advantage of a turnover by Ryan Suter to tie the score 1-1 at 14:28 of the first period with his first tally of the season. Fischer, who reached double figures in goals in back-to-back seasons from 2017-19, ended a 43-game drought without a regular-season goal.

Greenway had five goals in the first 22 games, but none in his next 21 before scoring from in close off a feed from Marcus Foligno at 3:37 of the second period, giving the Wild a 2-1 lead.

Johansson got to a loose puck in the crease and pushed it across the goal line to make it 3-1 on a power play at 9:38 of the middle period.

The Coyotes cut it to 3-2 at 1:15 of the third period when Goligoski scored on a slap shot from the left point.

Fiala re-established the two-goal lead for the Wild when he scored at 6:20 to make it 4-2.

Brodin scored into an empty net with 2:07 left.