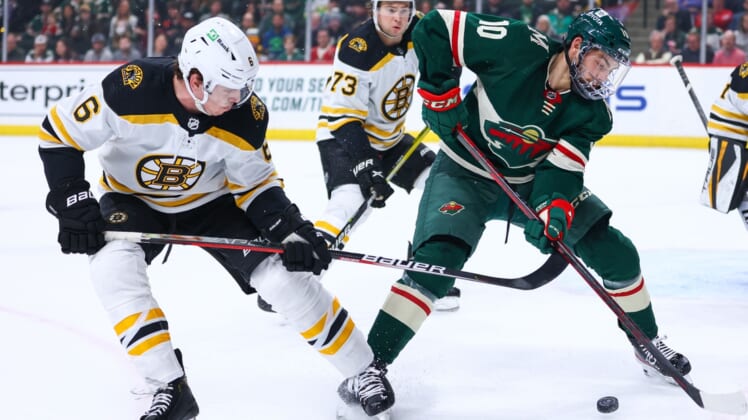 Jordan Greenway scored the go-ahead goal in the third period, and the Minnesota Wild held on for a 4-2 win over the Boston Bruins on Wednesday night in St. Paul, Minn.

Kirill Kaprizov scored twice and Ryan Hartman added an empty-net goal for Minnesota, which snapped a two-game skid. Jared Spurgeon tallied two assists and Alex Goligoski had one for the Wild.

Craig Smith and Brad Marchand scored one goal apiece for Boston, whose three-game winning streak came to an end.

Wild goaltender Cam Talbot stopped 24 of 26 shots in the win.

The score was tied at 2-2 midway through the third period when Greenway put Minnesota on top. He turned to his forehand and punched a shot past Swayman’s stick side for his sixth goal of the season and his second in as many games.

The Bruins tried to pull even with an extra attacker in the final minute, but Hartman intercepted the puck and scored into an empty net with 4.9 seconds left to seal the victory.

Minnesota grabbed a 1-0 lead at 6:55 of the first period. Kaprizov fired a shot through traffic to capitalize on the Wild’s first power play of the night.

The Wild made it 2-0 with 5:32 left in the first period on Kaprizov’s second goal of the game and 32nd of the season. Mats Zuccarello fed a long pass to Kaprizov, who sprinted forward on a short breakaway and beat Swayman with a quick wrist shot.

Boston cut the deficit to 2-1 with 3:01 remaining in the first period. Smith punched in a shot from the front of the crease for his 14th goal of the season and his eighth since March 3.

The Bruins pulled even at 2-2 within the first two minutes of the second period. On the power play, Marchand ripped a wrist shot through traffic and past Talbot’s glove side.

It was the 24th goal of the season for Marchand, who had not scored since Feb. 26.

Tyson Jost did not record a point in his team debut with the Wild, who acquired him from the Colorado Avalanche on Tuesday in exchange for Nico Sturm.