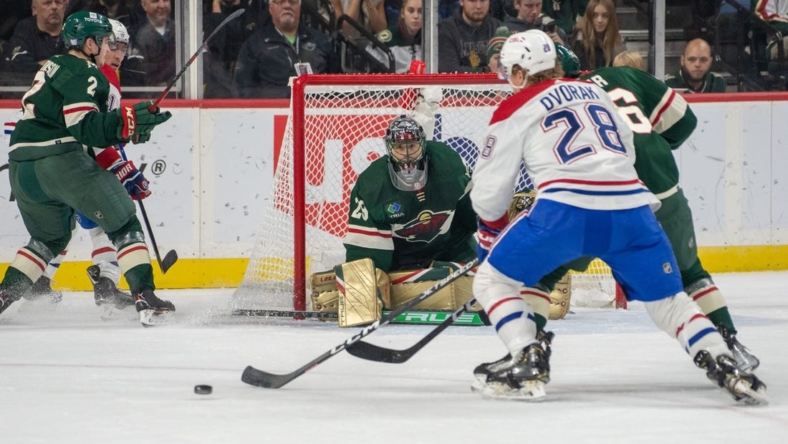 Kirill Kaprizov scored twice, Matt Boldy had a goal with an assist and Marc-Andre Fleury made 34 saves, as the Minnesota Wild beat the visiting Montreal Canadiens 4-1 on Tuesday night in Saint Paul, Minn.

Minnesota scored three times in the second period, with Kaprizov posting his seventh and eighth goals of the season, and Mason Shaw the second of his career. Boldy added an empty-netter as it improved to 2-3-0 at home on the young campaign.

Fleury, who turns 38 on Nov. 28, was solid most of the night, and particularly stout during the first period en route to his fourth straight winning start. He seemed headed for his 72nd career shutout until Montreal’s Nick Suzuki scored on the power play with 6:30 remaining in regulation.

Jake Allen stopped 27 shots for Montreal, which is 2-1-0 on a four-game trip. The Canadiens have lost 14 of the last 15 against the Wild, and nine straight at Minnesota, which won 3-1 at Montreal on Oct. 25.

Montreal was the aggressor for most of the first period, and recorded 15 official shots on goal. However, Fleury saved each one, as the teams went into the first intermission without a goal.

However, it was Minnesota that got going early in the second period, scoring on its second shot just 1:09 into the frame. Allen made the save on Joel Eriksson Ek’s shot, but the rebound was long enough for Shaw to pick up and convert his second goal in as many contests.

Nearly 2 1/2 minutes later, the Wild came through on the power play. Eriksson Ek started a play that concluded with Kaprizov deflecting in Boldy’s drive for a 2-0 lead. Kaprizov struck again with 5:05 remaining in the second when he pushed in Marco Rossi’s bouncer in front of Allen.

Meanwhile, Suzuki, who went short-side to beat Fleury, has goals in back-to-back games, and five on the season for Montreal.