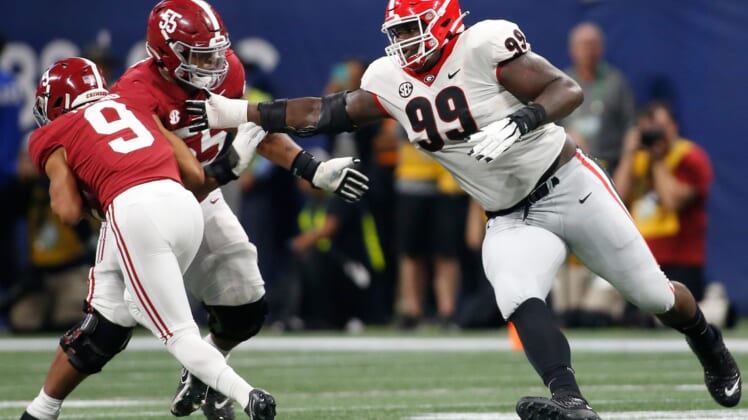 Georgia football coach Kirby Smart had a front-row seat for the SEC championship game as the Bulldogs — then ranked No. 1 in the nation — were thumped by third-ranked Alabama 41-24.

More recently, Smart has studied the tape of the Crimson Tide’s 27-6 win over Cincinnati in the College Football Playoff semifinals.

“That’s the ultimate challenge,” Smart said of Alabama, which faces off against Georgia for the national championship on Monday night in Indianapolis.

The Heisman Trophy winner torched the Bulldogs for 421 passing yards and three touchdowns in last month’s SEC title game. Then against the Bearcats on New Year’s Eve, Young took a backseat to the Crimson Tide’s talented rushing attack. He still threw three touchdowns in that contest, but he only accumulated 181 passing yards, while Brian Robinson Jr. rushed for 204 of the team’s 301 yards on the ground.

Yet, despite the multiple facets of Alabama’s offense, Smart realizes that the No. 1 enemy has to be Young, who has thrown for 4,503 yards and 46 touchdowns with only five interceptions this season.

“You look across the board at the efficiency with which Bryce Young has played with,” Smart continued, “and he’s got good weapons around him. He’s got a really good team around him. But make no mistake about it, he is elite at what he does.”

As for Saban, who is trying to win his seventh national championship at Alabama (and his eighth overall), the veteran coach knows it all starts with his sophomore signal-caller.

Saban’s squad will seek to complete its most recent run to the title against a team that Saban described Sunday as “outstanding.”

“They’ve been one of the most consistent, well-coached teams all year long,” Saban noted of the Bulldogs. “And it’s certainly going to be a great challenge for us to have the opportunity to play them.”

The feeling is mutual from Smart, who is hoping to guide Georgia to its first national championship since the 1980 season. All it will take is solving the greatest college football program of the 21st century.

“We’ve gotten to see them once already and know how good they are,” Smart said. “They really do not have weaknesses across the board. They’re playing really, really good football right now. And it should be a tremendous challenge for our team tomorrow night.”