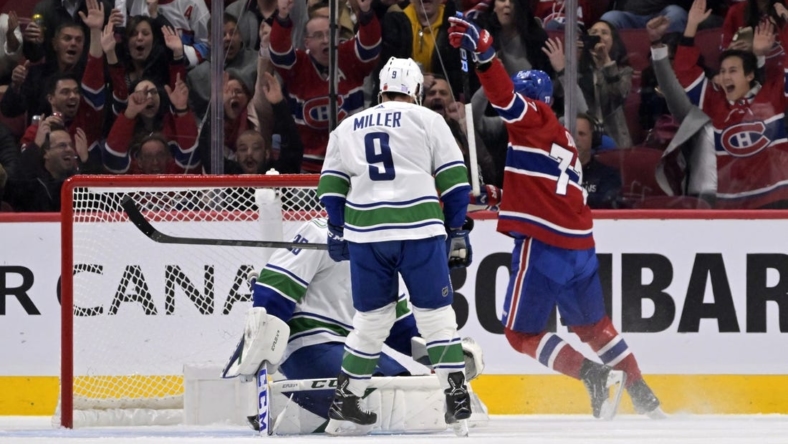 Kirby Dach scored twice, Nick Suzuki tallied less than a minute into the game and Mike Hoffman registered his third goal in two contests as the Montreal Canadiens earned a 5-2 victory over the visiting Vancouver Canucks on Wednesday night.

The Canadiens’ Sam Montembeault made 31 saves and appeared headed for his second career shutout before the Canucks’ Luke Schenn scored 4:45 into the third. Vancouver’s Nils Hoglander put in a rebound with 11:03 left.

Entering on a 4-1-1 stretch, Vancouver was stagnant until outshooting Montreal 15-5 in the third. The Canucks struggled to handle the puck, and Thatcher Demko seemed frazzled at times while stopping 24 shots. The Canucks have allowed an average of 4.1 goals this season, which began on an 0-5-2 rut.

Just 43 seconds into the game, Vancouver’s Tanner Pearson was whistled for hooking. Then 12 seconds later, Suzuki sent in a shot from outside the top circle for his team-leading ninth goal.

Opponents are 18-for-47 (38.3 percent) on the power play against the Canucks this season after the Canadiens went 1-for-4.

Montreal made it 2-0 at 8:47 of the first. Off a faceoff in the Canucks’ zone, Xhekaj drove the puck home through traffic.

A little less than four minutes later, Dach was the recipient of a giveaway from Vancouver’s J.T. Miller in the Canucks’ end, and he pushed the puck past Demko.

The Canadiens added on at 13:01 of the second period. After the Canucks’ Jack Rathbone misplayed the puck near the Montreal blue line, Hoffman, who scored twice on Tuesday during a 3-2 shootout win at Detroit, picked it up, streaked in untouched and beat Demko.

After Vancouver made it 4-2, a wide-open Dach bested Demko with 4:58 to play for his second-career multi-goal game.

Montreal was minus 18-year-old Juraj Slafkovsky, the 2022 No. 1 overall draft pick who served the first game of a two-game suspension for boarding the Red Wings’ Matt Luff on Tuesday. Teammate Josh Anderson served the second of his two-game ban, also for boarding, but against the Vegas Golden Knights on Saturday.