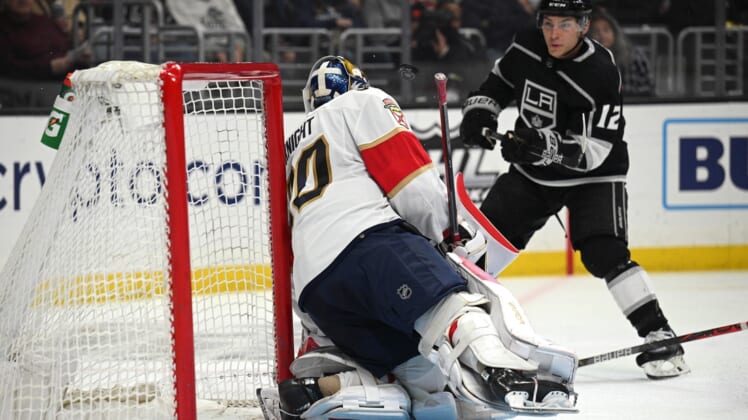 Martin Frk tied the score with 32 seconds left in regulation and the Los Angeles Kings beat the visiting Florida Panthers 3-2 in a shootout on Sunday night.

Jonathan Quick made 30 saves and stopped three attempts in the five-round shootout for the Kings, who were coming off back-to-back losses to the San Jose Sharks.

Eetu Luostarinen and Brandon Montour scored, and Spencer Knight made 35 saves for Florida, which saw its five-game winning streak end to start a seven-game road trip.
Trevor Moore scored the decisive goal in the shootout. Quick then stopped Anthony Duclair to conclude the game.

After the Kings went on a power play with 1:12 remaining and Quick was pulled for the extra skater, Frk tied the score 2-2 with a slap shot from the top of the right circle.

The Panthers scored two goals in the first four minutes of the second period to take a 2-1 lead.

Luostarinen scored short-handed 43 seconds into the period to tie it 1-1.

Jonathan Huberdeau passed the puck to Luostarinen, who had a step on Kings defenseman Sean Durzi, and he scored between Quick’s pads.

Huberdeau recorded his NHL-leading 65th assist of the season on the play, but was in the penalty box for Frk’s tying goal.

Aleksander Barkov took a shot from just inside the blue line just as Montour crashed the net and the puck hit traffic. Montour got to it first and shot it past Quick for the lead.

Rasmus Kupari took possession of the puck in the neutral zone and weaved his way through the defense before taking a sweeping backhand from the bottom of the left circle. The shot beat Knight on the short side for his fourth goal of the season.