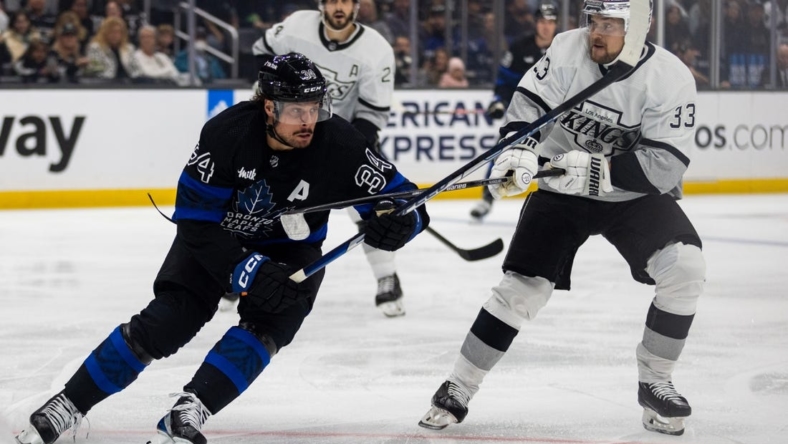 Kevin Fiala had a goal and an assist for the Los Angeles Kings in a 4-2 win against the visiting Toronto Maple Leafs on Saturday evening.

John Tavares and Pierre Engvall scored, and Ilya Samsonov made 25 saves for the Maple Leafs, who have lost three in a row.

Los Angeles scored two power-play goals in the first 10 minutes of the second period to move ahead 2-1 and didn’t trail again.

Kempe scored on a one-timer from the right circle to tie the score 1-1 at 3:03. It was the sixth goal of the season for Kempe, who was playing in his 400th NHL game.

Phillip Danault stole a pass in the neutral zone and slid a backhand pass to Arvidsson off the rush. He scored on a one-timer to give Los Angeles a 2-1 lead at 9:03.

Vilardi scored his seventh goal of the season to extend the lead to 3-1 at 14:40 of the second. Kopitar made a backhand pass to Vilardi from behind the net and he scored on a one-timer.

Engvall scored off a rebound from the end boards to cut the lead to 3-2 at 16:58 of the second.

Fiala, who was demoted from the top line to the third line to start the game, won a race to the puck in the neutral zone and scored on a breakaway for a 4-2 lead at 2:11 of the third period.

Petersen came in with a 4.97 goals-against average and .842 save percentage in three starts this season. But he was sharp early in his first start at home this season, making a save on a short-handed breakaway by Mitchell Marner at 5:22 of the first period.

The Maple Leafs went on their first power play after Fiala was called for tripping Engvall at 10:20 of the first period and Tavares scored 25 seconds later for a 1-0 lead.