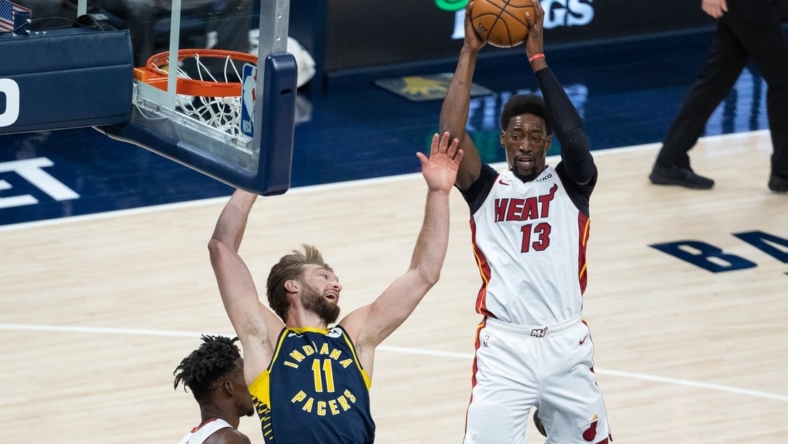 The Sacramento Kings continue pursuit of their elusive first win of the season when they face the road-weary Miami Heat on Saturday night.

The NBA treated new coach Mike Brown to four home games among his first five contests this season, but the Kings have yet to take advantage, losing the first three in front of their faithful to the Portland Trail Blazers, Los Angeles Clippers and Memphis Grizzlies.

The final home opportunity before a three-game Eastern swing will come against the Heat, who will be playing on the road for the third time in four nights. They split the first two games — a back-to-back — beating the Trail Blazers 119-98 before falling to the Golden State Warriors 123-110.

Sacramento fans will get an opportunity to see the continuation of a former Eastern Conference rivalry when the Kings’ Domantas Sabonis tangles with Heat big man Bam Adebayo.

The two former All-Stars have made it tough on each other in 11 previous meetings, all of which occurred while Sabonis was playing for the Indiana Pacers. The Pacers came out on top in seven of those 11 head-to-heads, and did so without Sabonis’ usual firepower as he was limited to 14.2 points per game.

Adebayo, meanwhile, could do no better than average 13.9 points in those games.

Miami has seen the Adebayo of old resurface on their Western swing after he’d struggled out of the gate this season. He contributed 18 points and eight rebounds in just 28 minutes to the Portland win, then hit 10 of his 13 shots en route to a season-best 26 points to complement eight more rebounds against Golden State.

“He was terrific on both ends of the court,” Heat coach Erik Spoelstra gushed after Thursday’s loss. “He was basically doing everything for us defensively. He was chasing around their perimeters because they’re not a normal team. Also, (he controlled) the glass for us.

“Then on the other end he was just really effective in the paint, and that’s probably where you have to try to really hurt this team is in the paint, at the rim, and he was very efficient on his catches and assertive.”

Jimmy Butler paced the Heat with 27 points, but Miami was hurt by getting just 30 points from its four reserves.

Depth at the end of a trip could be a factor again in Sacramento, where Kings reserves have averaged 39.3 points per game, a full nine more than their Heat counterparts.

Sabonis, meanwhile, has progressed on a game-by-game basis after opening the season with just 13 points and four rebounds against Portland.

He’s recorded double-doubles in each of his last three outings, including a season-best 14 rebounds against Golden State last Sunday, followed by a near-triple-double with 11 points, 11 rebounds and nine assists in Thursday’s 125-110 loss to the Memphis Grizzlies.

Sabonis was most impressed by rookie teammate Keegan Murray, who had his first career start against the Grizzlies. Murray had 18 points, making 7 of 15 shots.

“It was fun. He’s been waiting for this moment; he’s worked his whole career for this,” the veteran assessed. “He’s a great kid and makes the right reads. With him on the court, guys really respect him and that opens the court for everyone else.”