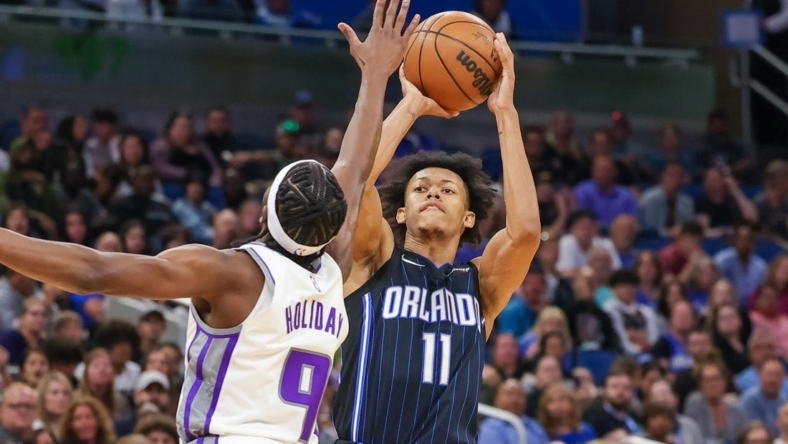 De’Aaron Fox bombed in a desperation 40-footer to beat the final horn of overtime as part of a 37-point performance and the visiting Sacramento Kings survived a frantic finish Saturday night to outlast the Orlando Magic, 126-123.

The Kings seemed to be in good shape to win for a second time on their three-game Eastern swing when Malik Monk’s two free throws gave the visitors a 123-119 lead with just 14.1 seconds remaining in overtime.

But Jalen Suggs hit two foul shots of his own with still 11.7 seconds to play. When Chuma Okeke turned a Monk turnover into a dunk, all of a sudden the score was tied at 123-all with just 2.5 seconds left.

The Kings then rushed the ball to Fox, who barely got past half court before rising and drilling his game-winner.

Fox had forced the overtime with a tying short jumper with 25.4 seconds left.

The Magic had the final two shots of regulation, but Franz Wagner misfired on a 3-pointer and, after grabbing the offensive rebound, Suggs couldn’t connect on a buzzer-beating three, prompting the extra five minutes in a 106-all tie.

The late tension belied a dramatically uneven first three quarters. The Magic ran off to a 65-47 halftime advantage before the Kings used 14-2 and 20-4 flurries in the third period to reverse things and go up 83-77.

Domantas Sabonis backed Fox in the scoring column with 25 as part of a double-double with a team-high 11 rebounds. He also found time for a team-high six assists.

Monk and Trey Lyles added 15 points apiece for the Kings, who outscored the Magic 45-12 on 3-pointers.

Banchero complemented his 33 points with a season-high 15 rebounds, while Wagner finished with 31 points, Bol 23 and Wendell Carter Jr. 17.