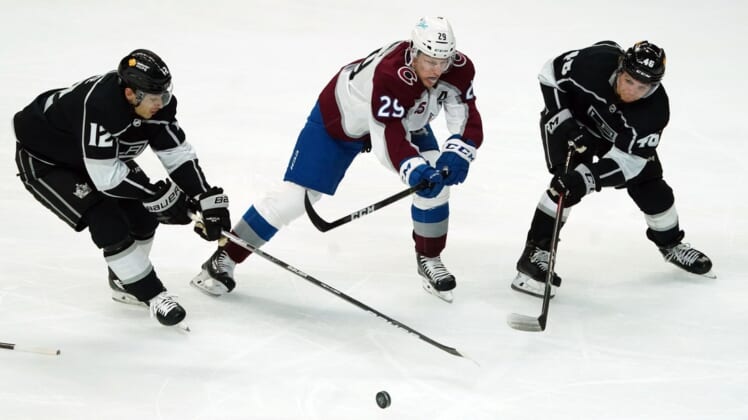 Adrian Kempe scored the tiebreaking goal with just under four minutes to play and the Los Angeles Kings edged the visiting Colorado Avalanche 4-2 on Thursday for their first victory of the season in four tries.

Drew Doughty and Gabriel Vilardi also scored power-play goals in the second period as the Kings topped the Avalanche two days after their rally against Colorado fell a goal short. Blake Lizotte added an empty-net goal for the Kings with 41.1 seconds remaining.

With overtime approaching, the Kings’ Anze Kopitar turned and centered the puck in close quarters to Kempe, who redirected the game-winner past Colorado goaltender Hunter Miska and off the left post. It was Kopitar’s second assist of the game and sixth of the season.

Mikko Rantanen and Nathan MacKinnon scored first-period goals for the Avalanche, with each recording an assist, but the Colorado offense was unable to deliver from there. Gabriel Landeskog hit the post with 1:57 remaining as the Avalanche nearly tied the game.

Kings goaltender Jonathan Quick made 24 saves for his first victory of the season. Miska stopped 23 shots for the Avalanche in his first career start. Miska had just one other NHL appearance, playing 18 minutes in a November 2018 game for the Arizona Coyotes against the Detroit Red Wings.

Doughty and Vilardi each scored from the right circle to tie the game 2-2 in the second period. Both shots went just under the crossbar, with Vilardi’s goal glancing off the side of Miska’s mask. Doughty scored at 3:35 of the middle period before Vilardi scored at 17:50 to tie it.

MacKinnon scored his second goal of the season for Colorado while adding his fifth assist. Rantanen scored his third goal in the past three games and added his second assist of the campaign.

Kopitar appeared in his 1,077th career game for the Kings, tying Luc Robitaille for third on the franchise’s all-time list. He trails just Dustin Brown (1,187) and Dave Taylor (1,111).

Defenseman Greg Pateryn played 15 minutes in his Colorado debut after he was acquired Tuesday from the Minnesota Wild.