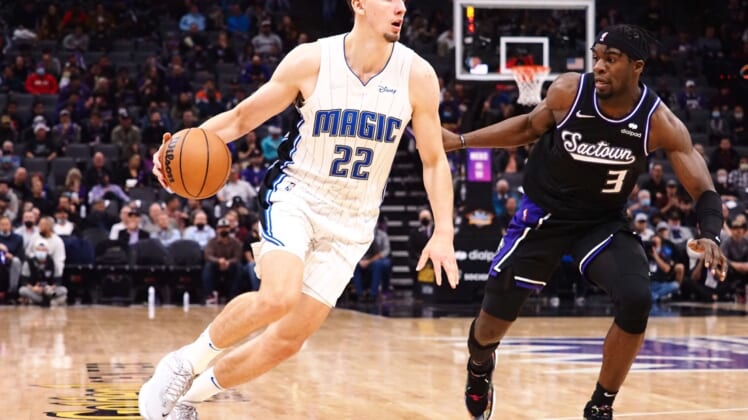 Fresh off a dramatic road win over Indiana, the Sacramento Kings continue a five-game road swing on Saturday night with a matchup against the Orlando Magic.

Damian Jones made a putback with two-tenths of a second left to give Sacramento a 110-109 victory over the host Pacers on Wednesday. Jones finished with 12 points on 5-for-6 shooting as the Kings posted just their fourth win in the past 16 games.

Jones turned in a 13-point, seven-rebound performance Sunday as the Kings concluded a four-game homestand with a 127-124 overtime loss to the Phoenix Suns.

“I mean, to be honest, it has been a pretty crazy season,” Jones said after the loss to Phoenix. “Just keeping my head straight and making sure I find a way to impact the game somehow. And just keep on working.”

Sacramento opened its current road trip — which includes a stop in Miami on Monday as well as a two-game series in Houston — without leading scorer De’Aaron Fox and two-time All-Star Domantas Sabonis.

Fox, who is averaging 23.2 points a game, has not played since March 16 due to an injured right hand. Sabonis, acquired from Indiana in February, is out after sustaining a bruised left knee against Phoenix.

Rookie Davion Mitchell helped lead the way against Indiana, scoring 25 points on 10-for-15 shooting for his sixth straight game in double figures. Chimezie Metu added a career-high 22 points, making three 3-pointers, in 26 minutes off the bench.

Orlando (20-54) has had five opportunities to put together a three-game winning streak this season and each resulted in a loss. The latest chance came on Wednesday at Oklahoma City in the second game of a back-to-back.

But following home wins over the Thunder and Golden State, the Magic fell hard at OKC, 118-102. Chuma Okeke made five 3-pointers and paced six Orlando players in double figures with 19 points, while Cole Anthony’s double-double included 17 points and 11 assists.

Orlando and Oklahoma City made 17 triples apiece on Wednesday, but the Thunder converted 25 of 30 free throws compared with 13 of 16 for the Magic.

“We were a step slow in areas and obviously, you know, they (the Thunder) got going,” Orlando coach Jamahl Mosley said. “It showed in the fact that we were a step slow in our foul situations. We talk about defending without fouling. We ended up putting them on the line 30 times.”

Guard Jeff Dowtin made his first appearance with Orlando since signing a 10-day contract on March 22, posting four points and three assists in a reserve role.

Five of Orlando’s eight remaining games will be at home, where the Magic have a 10-26 record. Orlando has lost seven of the last 10 overall meetings with Sacramento, most recently on Dec. 8 when the Kings won at home 142-130.