Kings shoot for redemption in rematch against Sharks 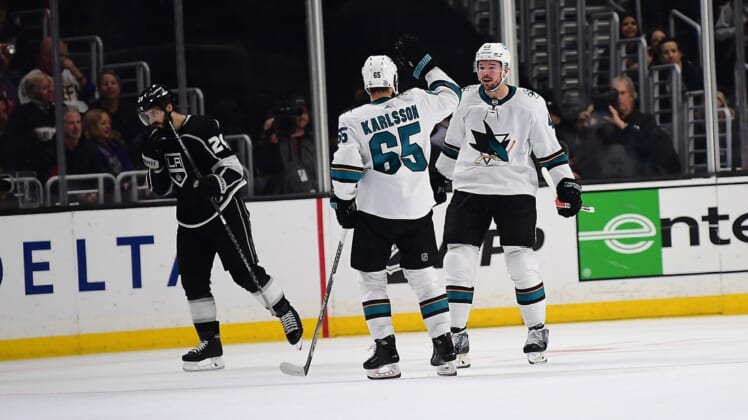 Those Kings, however, won’t have to wait long for a shot at redemption when they visit the Sharks in the back end of a home-and-home on Saturday night.

Los Angeles had won three in a row and eight of 10 before blowing a 3-1 second-period lead during Thursday’s 4-3 overtime home loss to the Sharks.

Despite the setback, the Kings are 12-3-3 since Jan. 23, and have a chance to avenge that defeat while trying for a fourth consecutive win on the road, where they’re 18-4-4 since opening the season 0-3-1 away from home.

“It’s a point on a night where we probably didn’t deserve a point, so let’s move on,” Kings coach Todd McLellan said. “Let’s fix a few things, a lot of things. And get ready to play again.”

Los Angeles fell 6-2 at San Jose on Jan. 17, when the Sharks scored the first four goals of the game and Timo Meier posted a career-high five goals. Meier, who did not have a point Thursday, has just four goals in 17 games since that magical performance against the Kings.

Meanwhile, his Sharks snapped an 0-2-1 skid Thursday, and will try to win back-to-back contests for the first time since a three-game winning streak from Jan. 6-11.

Tomas Hertl, Brent Burns and Alexander Barabanov each had a goal with an assist Thursday for San Jose, which scored the game’s final three goals to win for just the fifth time in the last 20 (5-9-6).

“I think when we do the things that we’re good at, we’re a good team just like any other team in this league,” Sharks defenseman Erik Karlsson, who recorded two assists against the Kings, told the NHL’s official website. “The margins are not as big as people think. I just think that we have a little bit of learning to do in how to keep it on a consistent level a little bit more often.”

Hertl, who snapped a five-game point drought Thursday, has six goals with seven assists during his last nine games versus Los Angeles.

Meanwhile, San Jose’s Zach Sawchenko made 33 saves for the second time in as many career starts to earn his first NHL win Thursday. He could be back in net Saturday if recently acquired Alex Stalock doesn’t get the chance to rebound from allowing six goals in an 8-0 loss to Nashville in his San Jose debut on March 5.

Los Angeles’ Jonathan Quick made 26 saves on Thursday, and has allowed 12 goals on 78 shots faced during his current 1-1-1 stretch. Teammate Cal Petersen has stopped 49 of 51 shots and posted a shutout while winning his last two starts — both on the road.

Teammate Phillip Danault had a goal with an assist Thursday. He’s recorded seven goals and five assists in his last 13 contests.