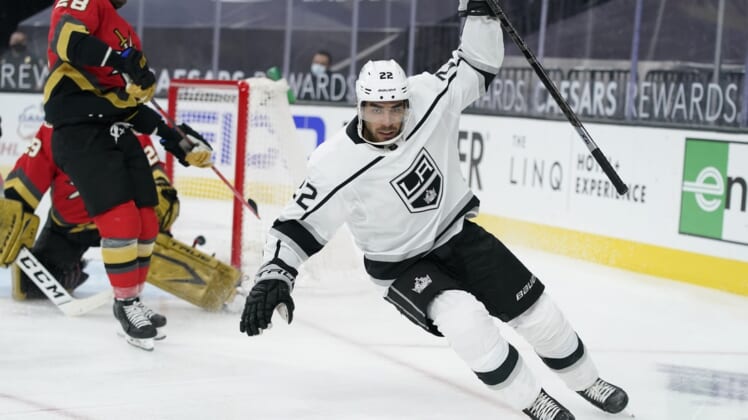 With a little over five weeks remaining in the regular season, the San Jose Sharks and Los Angeles Kings find themselves in a four-way battle with the St. Louis Blues and Arizona Coyotes for the final playoff berth in the West Division.

The Sharks and Kings, tied for sixth place with 34 points, are four points behind the fourth-place Blues and begin a key back-to-back on Friday night in Los Angeles.

Both come into the series with some momentum. San Jose has won four of its past six, including a home sweep of a two-game series with third-place Minnesota.

Los Angeles is 2-3 in its past five games but both victories came over the Vegas Golden Knights, including an impressive 4-2 win on Wednesday night in Las Vegas that helped knocked the Golden Knights out of first place.

“We’re right there with the rest of the pack,” said Kings coach Todd McLellan after goalie Cal Petersen turned aside 40 shots to register his second win in 10 days against the Golden Knights.

“I think it’s a race to one position for a lot of teams. I’m not sure anybody is going to catch Minnesota, Colorado or Vegas the way they’re playing. So it’s a race for one position and we’re there with a group of teams.”

That puts even more importance on the Friday-Saturday series with old rival San Jose, which swept the Kings last week at home and holds a 3-1-0 edge in the four games played so far this season.

Los Angeles then plays a back-to-back with fifth-place Arizona at home before heading back to San Jose for two more games.

“Every night is important,” McLellan said. “It’s important for the evolution of our organization but it’s important point-wise for us to put ourselves in a position to play later than the regular season.”

San Jose will bring a four-game road losing streak with it to Los Angeles and is just 8-10-2 away from the SAP Center this season.

“Winning two at home against L.A., winning two against Minnesota this week, big wins,” said San Jose coach Bob Boughner after Wednesday night’s 4-2 win over the Wild. “We’ve got to try and convert some of these efforts on the road now. It’s just a matter of taking this home game and taking it on the road with us. That’s going to be key.”

Defenseman Nikolai Knyzhov scored his first NHL goal in his 38th career game for what proved to be the game-winner, Brent Burns and Tomas Hertl each had two assists, and Martin Jones made 26 saves to lead the Sharks in Wednesday’s win over Minnesota.

“It’s been a while. It’s been almost halfway through the season. It’s so nice to get that monkey off my back,” Knyzhov said. “It’s even better to get a win with the boys here. Everybody’s excited.”

Knyzhov has been paired with two-time Norris Trophy winner Erik Karlsson, who assisted on his goal. Karlsson had two goals and also scored the shootout winner in Monday night’s 4-3 victory over the Wild.

“He makes it very easy for me to come in the lineup and play with him,” Knyzhov said. “He always talks to me between the periods and between the shifts so it’s very helpful. I’m just happy and blessed to be in this position.”